Posted by Unknown 9 comments
Email ThisBlogThis!Share to TwitterShare to FacebookShare to Pinterest
My latest issue of the Modern Brewery Age newsletter arrived via email last Friday. It's a ridiculous subscription, but as I have been getting more into the business of breweries, it has become a surprisingly invaluable and useful resource.

In any event, one of the useful features is the statistics that Pete drops into each issue. For example, in this past newsletter he looked at the Top 50 Craft Packages, Year to Date Ending 2/19/2012.

Not surprisingly, the top of the list is dominated by three breweries: Sam Adams, Sierra Nevada, and New Belgium; these three occupy all 12 of the Top 12 packages (Sam Adams Boston Lager 12pk is #1 with almost $4mil in sales on that package alone year-to-date).

There is only 1 package on the list from a Wisconsin brewery. Would you like to guess what it is? A "package" is, roughly, any bottled product available for retail sale. So, what do you think?

But the real answer? New Glarus Assorted 6pk. At number 50 on the list of the Top 50 nationally with a little over $419K in sales year-to-date.

The range of the Top 50 - under $500K in 2 months to over $3mil in 2 months - is pretty interesting to me. Sam Adams has 3 packages with over $3mil in sales for 2 months! Sierra Nevada is the only other craft brewery with 1. And New Belgium only has one package over $2mil in sales. This is pretty telling on not only the difference in scale from a National brand like Sam Adams, or even Sierra Nevada and New Belgium, to a local/regional craft like New Glarus. New Glarus is the only brewery on the list that is not available in multiple states. Also, there were 15 "Assorted", "Variety", or "Seasonal" packages (both 6pk and 12pk) in the Top 50.
Labels: modern brewery age, new glarus, statistics

Bet You're Wondering There's Been So Little Posting

Posted by Unknown 0 comments
Email ThisBlogThis!Share to TwitterShare to FacebookShare to Pinterest
Well, much of the MBR staff is gearing up, in one way or another, for the Second Annual Madison Craft Beer Week. To date there are over 150 events registered for the week and we still have over a month before the thing even starts.

So, check it out. Get excited - there are lots of cool things going on this year. And, if you're particularly interested in things like cask ale (and, really, who isn't?) - come on out to the Kick-Off Celebration and Cask Ale Festival.
Labels: cask ale, madison craft beer week

Posted by Unknown 2 comments
Email ThisBlogThis!Share to TwitterShare to FacebookShare to Pinterest
Read below, but lots of connections between Brooklyn NY's Sixpoint Brewing and Wisconsin.

March 12th, 2012, BROOKLYN, NY — Sixpoint Brewery, whose motto is “Beer Is Culture,”
will begin distribution in Wisconsin this month. The brewery was founded seven years ago
in Brooklyn, New York by Shane Welch, a graduate of the University of Wisconsin-Madison
and native of the Milwaukee area. With an increasing variety of draft beers and core flavors in
distinctive, 16 oz. cans, the brewery is excited to spread its heritage to Wisconsin.
In its short history, Sixpoint has grown to become one of the most well-received breweries in
the Northeast. Founded in a converted garage in Brooklyn, the brewery has produced more
than 200 styles of beer, with new limited-release beers circulating frequently. Sixpoint beers
are available at some of New York City’s finest restaurants, such as Gramercy Tavern, The
Spotted Pig and Momofuku restaurant group. The brewery has also spawned distinct, ongoing
beer series such as the Mad Scientists series, a bi-monthly release of innovative brews, and the
Spice of Life single hop varietal series.

Just one year ago, the brewery grew from its draft-only format to introduce 16 oz. cans of its
core flavors. Now with five year-round flavors in cans, including the 12 oz. strong ale Resin, and
four seasonal beers in cans as well as on draft, Sixpoint beers are more portable and visible
than ever. With terrific ratings for its numerous seasonal and core beer offerings on sites such
as Beer Advocate and RateBeer, the brewery has cultivated a widespread community of fans
from all over the world.

Sixpoint is ecstatic to offer its beers in the state that inspired its founder’s passion for craft beer.
Prior to founding Sixpoint, Shane Welch began homebrewing as a college student extensively,
and cut his teeth apprenticing at the Angelic Brewery (now closed) in Madison.

“All of the core Sixpoint beer recipes are extensions of my original homebrew recipes. These
are the beers I invented while brewing in my basement on Vilas Avenue in Madison,” remarked
Welch. “This literally defines grassroots. Starting with just an idea and passion in your
basement, then moving to a pressure cooker like New York and making it work, and then finally
coming home to share it with your friends and family in your native state. I can’t wait to buy
people some pints of Sixpoint!”

Sixpoint will be distributed throughout Wisconsin by Beechwood Distributors, based in New
Berlin.

“We are very much looking forward to representing Sixpoint beers in Wisconsin! They have
obviously been very successful in NYC and the east coast, and that success has created a pent
up demand and anticipation here,” said Dave Cartwright of Beechwood. “[The beers] are all
extremely drinkable while also being very flavorful and interesting. I am personally really looking
forward to trying some of the amazing limited edition beers they produce and hear so much
about.”

“I am thrilled to have Sixpoint’s great lineup of beers join the wide selection of craft beers
available in Wisconsin,” added Jayme Nawrocki, Vice President of Beer Barons Milwaukee
Cooperative.

New and old friends of the brewery can join in the excitement at numerous launch events
throughout the state. Seasonal varieties such as Harbinger Saison will be featured at upcoming
events for Milwaukee Beer Week in late April and Madison Beer Week in early May.
About Sixpoint Brewery:

Sixpoint Brewery was born out of an 800 square foot garage in Brooklyn, New York City in 2004
by homebrewer Shane Welch, who had amassed over 1000 individual homebrew recipes. The
brewery’s name is derived from the ancient six-pointed brewers’ star, which had symbolically
adorned the walls and equipment of ancient breweries since at least the Medieval period.
Sixpoint’s motto is “Beer is Culture” to highlight the human trajectory — the earliest human
civilizations were founded upon the cultivation of cereal grains for making beer. Sixpoint aims to
perpetually inspire the art, creativity, and community generated through beer by acknowledging
the history of the craft, while forging ahead to inspire culture in a modern setting.

Posted by Joe Walts 0 comments
Email ThisBlogThis!Share to TwitterShare to FacebookShare to Pinterest
The content of this page was updated on 8/19/2012.

-It reduces measurement errors because the weights and volumes are larger.
-It reduces the likelihood of excessive tannin extraction during sparging.
-It's more applicable to commercial brewing because most breweries lack the equipment to treat mash and sparge water independently or change the water treatment for each batch.

Removing alkalinity just to add some back in seemed wasteful at first, but I eventually realized that my kitchen faucet is an abundant source of cheap calcium carbonate. 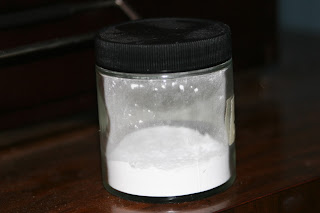 To collect the CaCO3, I poured the dregs of some lime-treated brewing water into a coffee filter and let it dry over the course of a day. My coffee maker did a good job of removing the standing water, and the filter full of calcium carbonate dried nicely on a plate afterward.
Labels: five gallons, water

Posted by Unknown 1 comments
Email ThisBlogThis!Share to TwitterShare to FacebookShare to Pinterest

A bunch of big names in brewing, to be sure. I think it's interesting 4 states, including the brewing Mecca of Delaware (?!) have multiple representatives while breweries from entire swaths of the country are completely absent, most notably Texas and the South-West and any Mountain state other than Colorado.

I'd further assert that perhaps some parts of the country are better-represented at Brewers Association events such as Great American Beer Fest, Savor, etc. because the BA has buy-in from those areas of the country which is directly related to the fact that prominent, influential breweries in that region are the Board. It's a bit of a chicken and egg problem, however, I think: they get buy-in because they have members in those regions that are in powerful positions, but the members are in powerful positions precisely because they have buy-in from that region.

What can we learn from this? Probably not much, other than that it is going to be business-as-usual in 2012 for the Brewers Association.
Labels: brewers assocation, brewers guild
Newer Posts Older Posts Home
Subscribe to: Posts (Atom)