Posted by Joe Walts
Email ThisBlogThis!Share to TwitterShare to FacebookShare to Pinterest
The content of this page was updated on 8/14/2012.

A variation of this MBR article was published in the November/December issue of The New Brewer (the journal of the Brewers Association). Before submitting the article I ran simulations of two, three, four and five batch sparges, which illustrate how the solutions convergence on a single answer as more sparges are added. It also changed the brewhouse efficiency multipliers by small amounts, which I'll get to shortly.

I recently read a thread on a professional brewers' forum about the logistics of no-sparge lautering. I was surprised to see the topic because very few commercial brewers employ the method. The reason why is because it's colossally inefficient, as shown in the chart below. 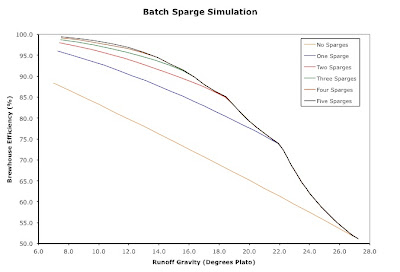 However, many homebrewers believe it results in better beer. The theory is straightforward: during the lauter, the wort in your lauter tun is always at the same gravity as the wort in your kettle. Because the wort in the lauter tun is always relatively dense, and therefore well-buffered against pH increases, fewer tannins are extracted from the husks. Now, before you decide to mash in with all of your brewing water to reduce tannin extraction, I'd like to point out that the enzymes responsible for creating complex protein-degradation products (which Jean De Clerck believes are far more important to mouthfeel than dextrins) work best in thick mashes. There's a simple solution, though: mash like you normally would for continuous sparging and mix in all of your "sparge" water shortly before vorlauf.


I won't be using the no-sparge method anytime soon because my mash/lauter tun is too small to hold the grist plus all of the water for a full-size batch. That doesn't damper my academic curiosity, though, so I created a set of no-sparge brewhouse efficiency multipliers and added them to the latest version of my chart. 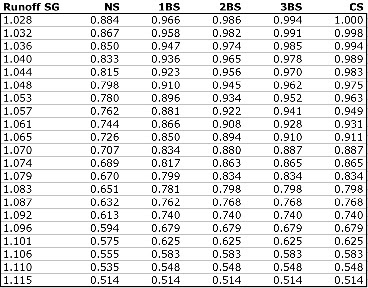 Switching topics, expect a water treatment overhaul in the next few months. I'm hoping to avoid another six-part series, but we'll see.