Cask Beer (or, What You Didn't Know You Were Missing)

Posted by Anonymous
Email ThisBlogThis!Share to TwitterShare to FacebookShare to Pinterest
So, this is a first in MBR history. A reprint, or rather an edit of a post from an earlier date. This won't be normal here, but as I was contemplating writing an article about cask beer, I realized I had already written a really good one.

What would prompt such a seemingly random, but apparently urgent, need for an article about Cask Beer you ask? I'm glad you asked.

Madison Craft Beer Week is right around the corner, yo. And one of the events that MBR has had a heavy hand in producing (in conjunction with Dane 101) is a Cask Ale and Music Festival to be held on Thursday May 5 starting at 6pm. Here's the deal: 3 bands, 10 casks, and unlimited beer. For $25.

Here's the deal. High Noon Saloon on May 5, 2011. Taps open at 6pm. Music starts at 8pm. For $25 you get a wristband that gives you unlimited sampling and amazing music from: Aaron Williams and the Hoodoo, Mama Digdown's Brass Band, and the Kissers. All perfect beer drinkin' music to throw you an All-American party. But, if you don't have a wristband, don't fret! Come on down and you can buy half-pints ($3) or full pints ($5) of any of the cask beers on tap.
Tap List:
Furthermore Proper or Knot Stock (this is the first cask for any Furthermore beer! [ed note: I suck])
Bell's Hopslam
Bell's Porter
New Holland Mad Hatter IPA
New Holland Poet Stout
Summit Oatmeal Stout
Vintage Hibiscus Saison (recipe by MBR Contributor and MCBW Organizer, Robyn Klinge; based on a homebrew recipe by MBR Contributor Joe Walts)
Southern Tier 2X IPA
Great Dane Potter's Run IPA
Great Dane ESB

You can buy your $25 wristband at Brown Paper Tickets. 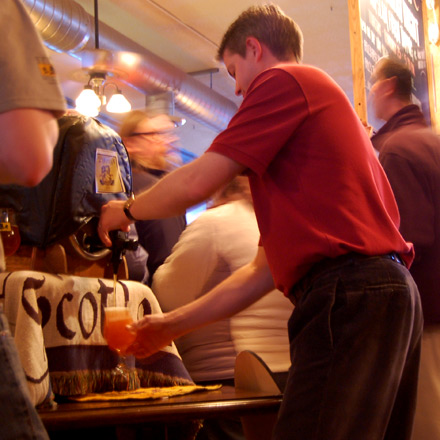 This article is about why that's a ridiculously good price for beer that you can get few other places in Madison (to my knowledge, Maduro has the only regular cask beer). Edited from the Hey Barkeep! Article of August 28, 2009.

First, it's important to get some terminology right.

You might hear the phrases "from a firkin" or "on cask" - these are different ways of saying that the beer is a cask ale. You might also hear the phrase "real ale" - this is a British-ism for cask ale.

The two primary ways of carbonating beer are "force carbonation" and "natural carbonation." Beer is force carbonated by sealing the beer in a tank (e.g., a keg) so that air can't escape and force CO2 into the tank. The CO2 has to go somewhere, and the liquid absorbs it. When you open the bottle, the CO2 escapes and you get bubbles and head.

Natural carbonation occurs by adding active yeast to the bottom of the vessel (either a bottle, or in this case a keg) and letting it eat some of the residual sugars (fermentation) and produce CO2 which gets absorbed into the liquid because it has nowhere else to go. If you see a bottle that says "bottle conditioned" this is what happened. Over time the bottle/keg will become more carbonated and (slightly) higher in alcohol.

Cask conditioned beer is beer that has been naturally carbonated in a keg.

But there's a problem here that you may not have picked up. The vast majority of beer served on-tap in the United States (and throughout the world for that matter) is via a CO2-based tap system (or CO2/Nitrogen mix for you nitro nerds). Subjecting a naturally carbonated beer to a CO2 system would cause some problems (not the least of which is that all the yeast would be flushed out of the system in the first pitcher!) Thus, there are two types of Cask serving methods, which we'll talk about in more detail later: gravity system (where the barrel is tipped up and the beer is poured out of a tap physically located on the keg) and a hand-pump (which works a bit like an old water pump would).

Bill Rogers, owner of The Malt House here in Madison, all-around genius beer guy, is a big fan of cask beer and one of the organizers of the Cask Beer and Music Festival.

MBR: Do you have a cask at The Malt House? If you don't, do you intend to put one there eventually?
Bill Rogers: We don't have cask ales now, though I've thought about how to do it. I think that gravity fed casks above the large ale cooler might work.

MBR: What do you think is the biggest reason against adopting casks? Is it supply side (breweries don't package in casks) or is it demand-side (consumers don't ask for it) or is it simply too big of a pain (different plumbing and training)?
Bill Rogers:I think you've hit on both of the issues with casks. First, even at The Great Taste of the Midwest, where there are 700 different beers, we only have about 50-60 casks and many of those are filled specifically for the fest. Most brewers don't use that kind of packaging, and those who do usually only have a few casks in their cooperage inventory. They're afraid to let them get too far afield for fear that they'll never see that keg again.

On the other hand, it takes specialized equipment to be able to serve casks, there are not many places that sell the gear, and fewer still who know how to install and use it.

There are two ways to serve cask ale as you've no doubt seen. There's the gravity feed mechanism used behind the bar at the downtown Great Dane, and the hand-pull from the cellar method [ed note: the Hilldale and Fitchburg Dane uses this type, or at least they did]. Each requires special equipment.

Gravity feed casks often (as is the case with the Great Dane) have a spring loaded bed that each cask rests on. As the cask empties, the spring slowly and gently raises the back end of the cask so that all the beer can drain from the faucet on the bottom of the front face. The casks also need some degree of chilling, because the ambient temperture in the barroom is too high for a pleasant draft. This is usually fixed by placing a stainless steel web of tubing over the top of the cask and running chilled glycol through it. Then you cover the whole thing with an insulated blanket to keep in the cold.

Hand-pull casks are usually kept in the basement, in or out of a walk-in cooler. You probably need a separate walk-in cooler for cask ales, because they should be dispensed at 45-50 degrees instead of the 38-40 for normal draft systems. The Map Room [ed note: in Chicago] has its own cask cellar separate from the draft celler, and separate from the bottle cellar. Those kept outside a cooler may need the same stainless chilling saddle as the barroom variety.

The hand-pull actually pumps the beer up to the serving faucet. It's just like an old-fashioned well water pump. No gas pressure can be applied to the keg to move the beer. That's the important part of cask ale service. The only allowable force for dispensing the beer is gravity or the bartender operating a hand pump. CAMRA does not even allow taverns to top off the cask's head space with CO2 if the pub wants to call it cask ale or real ale. All CO2 in the cask must be naturally produced by the beer, in the vessel it's served from, according to them.

[ed note: CAMRA is the CAMpaign for Real Ale; it is a UK-based organization that educates consumers and publicans on the benefits of cask/real ale]

That works fine for many UK pubs, but cask ale goes flat and oxidizes if not finished within 3-5 days of tapping. Many pubs, especially here in the US where CAMRA does not operate, prefer to top off the cask with CO2 using a device called a cask breather. The cask breather sits atop the cask in the place of the spile (the semi-porous plug at the top of a tapped cask) and allows up to 3psi of CO2 to replace the beer as it's poured. Spoilage is averted because CO2 is pretty inert. The low level of CO2 applied also does not affect the natural carbonation level. So, there's another special piece of equipment needed...the cask breather.

In short, it takes a dedicated publican or cellarman to properly install, maintain and use cask ales.

MBR: What do you think is the biggest reason in favor of adopting casks?
Bill Rogers: They're cool. They harken back to simpler times centuries ago when ale was delivered in its finishing vessel, was placed on the bar, tapped and drained. Flavors are often fresher and the beer is softer on the palate.

MBR: Favorite cask beer?
Bill Rogers: Not sure I have one. The only beer (outside the Dane) that's regularly available here is Two Hearted. I get mine at Maduro. The Great Dane had a beer once called 7 C's that I seem to remember being great on cask. The 7 C's were seven different varieties of American hops that started with the letter C. Potter's Run IPA was always a great cask ale too.
[Ed note: casks are becoming more widespread across the country. I have spoken with a number of cellarmen who are telling me that it is becoming more common for the bar or the distributor to actually own the cask; they send it to the brewery to be filled. This eliminates one of the problems with casks - bars stealing/not returning/sitting on them]
Labels: bill rogers, cask ale, madison beer week, malt house