Posted by Robyn K
Email ThisBlogThis!Share to TwitterShare to FacebookShare to Pinterest
Well, Send Off Beers Part 2 was intended to be my next post, but for obviously reasons, I'm moving this one up.

My friend and I had a bit of a narrow miss here, leaving Christchurch just two hours before the earthquake hit. Our intention was to visit Pomeroy's Old Brewery Inn that day, but the brewpub is closed for lunch during the week so we decided to move on. Poor planning on my part that ended up being a lucky fortune! (Though I'm still a bit crabby that I didn't get to sample any of their beers.)

We did get to visit two Christchurch breweries the day before the quake though: Dux de Lux and the Twisted Hop. Both get a thumbs up from me! Great atmospheres, great beers and great staff at both. We really had a good time.

Dux de Lux was our first stop upon arriving in Christchurch. It was a beautiful day and they have a lovely outdoor patio. I got the full flight and enjoyed everything but the Ginger Tom, which is an alcoholic ginger beer. You REALLY have to like ginger in order to enjoy this beer. It was way too much for me, but my friend loved it (in fact, it launched a trip-long hunt for the country's best ginger beer). My favorites were the Hereford Bitter and the Black Shag. The Hereford bitter is something of a cross between a standard English bitter and an Oktoberfest- malt forward with nice caramel notes, a nutty aroma and a subtle hop finish. The stout was poured on nitro, so it was nice and creamy (which I love!), pretty sweet for a stout (leaning towards a milk stout) with a roasty after taste and maybe some very subtle licorice flavors. 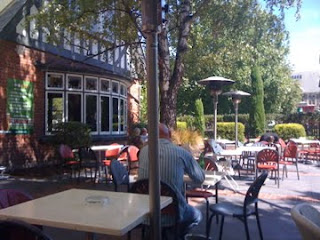 Later that night we headed over to the Twisted Hop, which focuses almost entirely on real ales. Yay! The Twisted Hop was terribly charming: it's situated in an area of town with very narrow lanes and beautiful old brick buildings, many of which are sadly gone now. Again, I ordered the flight here. Surprisingly, I think my favorite was the Improvisation Pale Ale- citrusy, with orange and lemon flavors, this is definitely an English-style pale ale, which I enjoy much more that the hopped-up American versions. Of course, I should say that was my favorite until I got to the Nokabollokov Imperial Stout and the Enigma Barley Wine.... The Nokabollokov is all roast and burnt chocolate, and velvety smooth. The burnt flavor is not overwhelming or offensive at all: it complimented the chocolate in the beer nicely, like char on a grilled hamburger. I really enjoyed this one.

The Enigma Barley Wine was all dark fruits, raisins and molasses, with a surprising spritz of citrus underneath and a slightly hoppy finish. My only criticism is that you definitely get that alcohol bite at the end. The Twisted Hop came through pretty well in the earthquake from what I've heard (and relative to the buildings around it)- John, the brewer at Arrow Brewing, told us that they had an engineer in after the last quake to tell them what building improvements they needed to make, which was all a huge pain in the behind apparently (along with being wicked expensive), but clearly paid off in the end! Here are some before and afters of the Twisted Hop (the after shots courtesy of the Twisted Hop website): 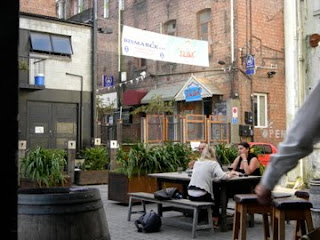 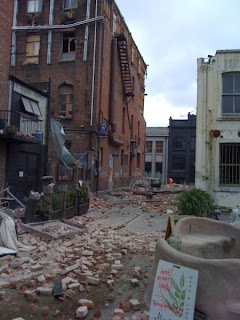 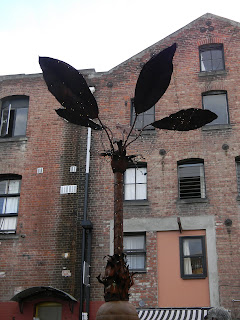 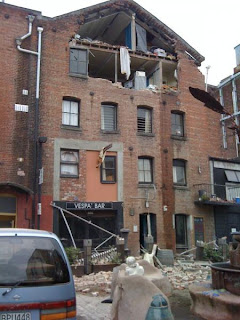 After news of the quake came out, we were all anxious to hear how our brewer friends fared (along with everyone else, of course). The Society of Beer Advocates posted some updates for us in the days following: (Note: I've shortened this update from SOBA to just the breweries in and around Christchurch. Additional updates on local beer bars and liquor stores can be found in the full text here.)

I'm sure we're all far too busy worrying about our friends and loved ones in Christchurch to be thinking much about beer right now, but for many of us, the wonderful brewers, publicans, and SOBA people in Christchurch *are* our friends.

For those not glued to twitter, here are some updates to hand. Note that I'll not be spreading any rumours here, this is just what is known by those involved or tweeted by trusted friends.

The Twisted Hop: Martin and Sean are both safe, and the pub is still standing (just) - remarkable!

Pomeroys: Not so lucky, the building is trashed, but the people are OK and that's always the important point. Update from Robyn (via Twitter): power and water have now both been restored. Hurrah!

Three Boys: Ralph is alive, well, and reporting in his own inimitable style that the brewery is "fucked". 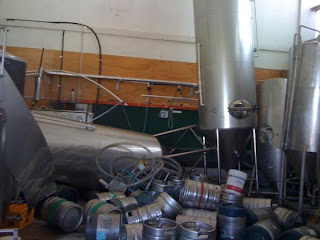 Cassels and Sons: Nigel is tweeting that the brewery is in a bad way, and he'll be down for some time, but at least he is tweeting! Update from Robyn: we've also had a video update from Cassels. 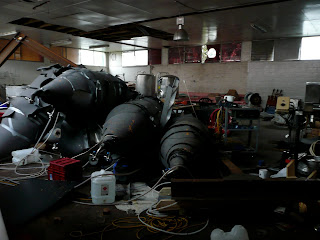 Dux de Lux is in bad shape but fixable, and Dick is OK. He also says Matsons looks OK, confirmed by David Wood who tweeted that they even finished a brew during the quake!

I've just had a call from ex-Golden Ticketer, and now Harringtons employee Nathan Crabbe. Nathan is safe and sound in Twizel, but has heard from Mark at Harringtons that all are safe, but the brewery is in a bad way.

Andrew Madden from Lion Nathan confirmed that all staff were OK, but the Canterbury brewery took more damage to add to the battering it received in September.

Geoff Griggs tells me that Paul McGurk at Wigram is OK and the brewery has sustained only minor damage.

I also saw that McCashin's Brewery in Nelson is donating space and equipment for brewing and bottling, as well as ingredients to any breweries put out of commission by the earthquake, which I think is very cool. I've heard that a few other breweries have offered the same, but I can't confirm who. If you'd like to donate to the recovery efforts in Christchurch, you can do so through the New Zealand Red Cross. I'm sure moral support via Twitter, Facebook and email would be welcome too!
Labels: Christchurch, Christchurch breweries, earthquake, New Zealand, New Zealand breweries