This One Couldn't Wait Until Monday

Posted by Jeff
Email ThisBlogThis!Share to TwitterShare to FacebookShare to Pinterest
This has been a bit of a lazy week for me. It's been ridiculously busy the past few weeks, so I sort of took last week off a bit.

To make up for it, a bonus Saturday post. I was talking with some friends recently and someone mentioned that Germans like to mix beer with soda. I'd never heard of this, and frankly it sounds disgusting. But, not only do the Germans mix their beer with soda - they BUY pre-mixed beer and soda. Thankfully, so far this year Germans have purchased 4.7% less of these beer mixes. 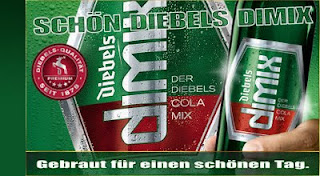 This awesome stuff that you see the ad for there is a mix of alt-bier and cola called "diesel". Too bad JT Whitney's isn't still around, that would be a great place to try such a concoction.
Labels: cocktails, jt whitneys, soda