Posted by Jeff
Email ThisBlogThis!Share to TwitterShare to FacebookShare to Pinterest
Much thanks to all of the breweries who hosted us, but most of all to Ron Jeffries at Jolly Pumpkin and Dave Engbers at Founders Brewing Company who really went out of their way to make this trip educational and enjoyable.

This trip covered 8 (or 9 depending on which group you were with) breweries in three days: Arbor Brewing Company, Jolly Pumpkin, Kuhnhenn, Dragonmead, Founders, New Holland, Bells, Olde Peninsula, and Dark Horse. Unfortunately, MBR wasn't able to make it to Dark Horse, but we look forward to catching them when they are in town for the Great Taste of the Midwest.

First up was Arbor Brewing Company for lunch. This particular day Ann Arbor was a bear to get around. There was an Antique Car Rally going on at the same time we were trying to get there and many of the streets were blocked off which made parking anywhere near the brewery near impossible. Once we got there we enjoyed a fine lunch with the smoked lager and the stein beer. I applaud the server for checking to make sure I knew what I was getting into when I ordered the smoked lager - smoked beers aren't for everyone and if you don't enjoy drinking bacon, you may want to order the taster first. But I love smoked beers. And this one wasn't quite as smoky as she had let on - or at least compared to something like the Aecht Schlenkerla Rauch Marzen or Ur-Bock. Nonetheless it was quite enjoyable, as was the stein beer which was more like a simple, sweet oktoberfest than a true, complex, caramelized steinbier like that brewed at The Grumpy Troll.

Then on to Jolly Pumpkin in Dexter, Michigan. Ron Jeffries, owner and brewmaster, was on-hand to show us around the modest warehouse facility. 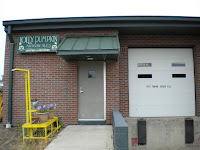 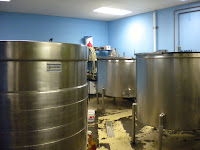 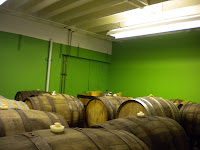 There were three things that stuck out about the operation at Jolly Pumpkin. First, you can't see them in these pictures, but the mashtuns are square stainless converted dairy equipment. The mashtuns have sliding doors on top like a dairy case and don't look anything like the usual mashtun that you see in breweries. From the get-go you realize the crafted nature of an operation like Jolly Pumpkin - the craft of brewing is fundamental to the very way that they do business.

The second interesting thing were the open fermenters and wood barrels that give Jolly Pumpkin beers their unique funky, sour characteristics. The open fermentation doesn't have to result in a sour beer - in fact, a number of breweries, including some European light lager breweries, use open fermenters. Open fermentation can be tricky, and these in particular are flat-bottomed vessels, not the usual conical fermenters that have become ubiquitous in the brewing industry, which makes cleaning even more difficult. Also, Jolly Pumpkin does not innoculate their barrels with purchased wild yeasts and bacteria strains; only strains already found in the brewery and the barrels are used. This results in more complex interactions - lab-produced strains are isolated and have known interactions, but true "wild" beers have dozens if not hundreds of strains that all act on the beer in different ways.

Third, the sheer amount of manual labor - from blending to hand bottling to rotating the stock for carbonation - is amazing. In fact, if you listen to how much work goes into producing a bottle of, say, La Roja you'd be amazed that Ron has any time at all to be giving yahoos like us a tour around the place. Small operations almost always have some sort of hand-bottling facility. But, Jolly Pumpkin's labor starts even before beer gets into the bright tank with tasting from each wooden barrel in consideration for a given batch. Even the storage and tracking of the barrels is manual. Then each proposed barrel is tasted and considered for the current batch and blends. Then bottling is a time-consuming, largely manual process. Finally, Jolly Pumpkin beers are bottle-conditioned. This means that each bottle is primed with additional yeast and sugar and set aside to carbonate. Where cases are stacked, temperature variances from the top of the stack to the bottom of the stack require the stack itself to be manually re-ordered in order to ensure consistent carbonation throughout (bottle carbonate faster at higher temperatures). 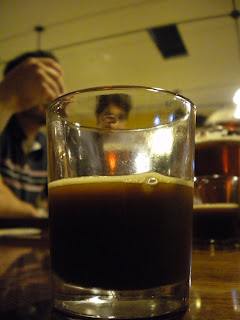 After Jolly Pumpkin, it was off to Kuhnhenn (with stops at Ashley's in Ann Arbor and Slows in Detroit). The picture to your left there is the taster of Kuhnhenn's slobber-inducing Raspberry Eisbock. The Eisbock is a big, burly, complex, high-alcohol, high-priced sort of thing that seems almost engineered for beer geeks around the globe. And, it's really, really good.

Unfortunately, Kuhnhenn's was out of some of their other taps and the remainder of what we had - porters, oktoberfests, stouts, IPAs - weren't really inspiring enough to make us stick around through bad piano covers of "Jane Says." So, taking the advice of some beer people much smarter that me, we went to Dragonmead, also in Warren, Michigan. Which begs the question: what's up with Warren, Michigan? It's an industrial hole of a suburb with shuttered car factories and other industrial warehousing, but home to two good breweries. Strange.

Dragonmead was unbelievably good. While it's been open for 11 years, it has surprisingly little hype (especially considering Kuhnhenn up the street) and seems to fly under-the-radar. But the true beer geeks know what's up, I guess and the recommendation to stop here was spot on. The tap-list of house-brewed beers went on for 5 or 6 pages - styles of every type and variety. Smoked beers, pepper beers, scotch ales, kolschs, doppelbocks, dubbels, blondes, wits. The Kolsch, an under-brewed style, was really one of the best I've ever had. The mild, another oft-looked-over style, was on a nitrogen tap and was phenomenally good; the roastiness and assertiveness peeked above the creaminess of the nitro carbonation to provide a flavorful, low-alcohol, highly sessionable beer. And the music, with acoustic Steve Earle and Hank Williams Sr covers, was much more accomplished.