Posted by Jeff
Email ThisBlogThis!Share to TwitterShare to FacebookShare to Pinterest
Sorry for the lack of posting today, but I took some time off and drove up to the La Crosse/Eau Claire area to visit some breweries and friends and family. Today, Friday, I hit up Dave's Brewfarm in Wilson, WI. Wilson is about 30 minutes West of Eau Claire. I've talked about Dave's Brewfarm on a number of occasions.

Well, it looks like this thing is really starting to come together. Dave will be starting to brew shortly, in the short terms cans (a la Surly) will be produced in Stevens Point and bottles at Sand Creek. 750s and draught will come from the brewfarm's 7 barrel system. I'll have more on this as it comes together, but let's just say I can't wait to take my tent up for Brewstock.

In the meantime, here's some un-retouched pictures of the place as it's coming together. 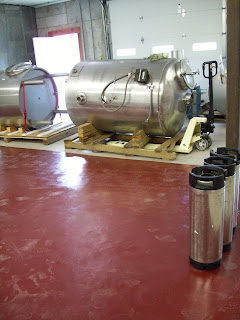 Some of the brewing equipment just came in. We were told "later this week this stuff is going to get installed. Oh. Wait. What is today? Friday? Maybe next week, I guess." As a sign of the recycled nature of brewing equipment, this particular stuff (kettle and mashtun it looks like) started its life at Avery Brewing Co in Colorado. 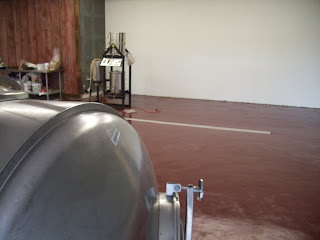 This big empty spot is where everything will eventually get installed. To the left, off-screen, is where the wooden barrels and tasting room will be, to the right is the fermentation room and possible aging caves (the brewery is built into the side of a hill). You can see the test-batch system in the background. 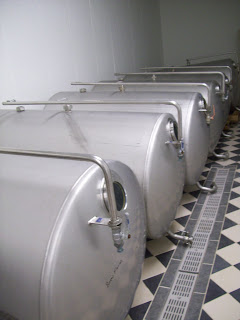 Horizontal fermenters from Germany in the fermentation room. There are some vertical fermenters behind the photographer. This room is built into the side of a hill, and eventually (in an unknowably distant future) some of the wall might be knocked down to do some proper cave aging. 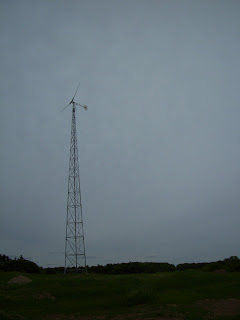 The windmill that will power the brewery. About 100 yards (maybe 200? 300?) from the brewery, it currently provides the brewery income for the surplus energy it adds back on to the grid. To the right, off-screen, is a large geo-thermal heat-exchange field that heats and cools the brewery. 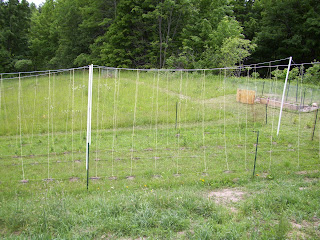 Although certification is too expensive, these organic hops (centennial, fuggle, a few others, and some crazy experimental hop from New Mexico) are growing in organic soil. They are in the first year of a three-year growth start process, its future yield is unknown right now, but could eventually make some great fresh hop beers. Unfortunately, the barley growing and malting process is too much to take on right now.

Dave and his wife Pam are hopeful that all the necessary paperwork will be completed and the first batches of beer can be done by mid-August. If so, I hope you'll join me in the tasting room to open this place up.
Labels: brewfarm