Posted by Jeff
Email ThisBlogThis!Share to TwitterShare to FacebookShare to Pinterest
I mention this because it's just one of the summer(ish) beer festivals held around the state. Your attendance not only supports the breweries, but the communities and organizations that hold these events. So, since it's too expensive to fly anywhere - take a vacation and head to any number of in-state beer festivals throughout the summer. 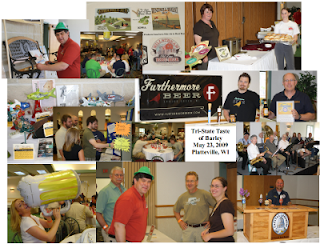 The first annual Tri-State Taste of Barley sponsored by the Platteville Area Chamber of Commerce and the American Breweriana Association was very well received in the community and was a very nice success for the first time around.

Craft Breweries were represented from Wisconsin, Iowa, and Illinois.

A home brewing presentation was put on by Tom Nickels.

SAFE Grant County Coalition had a setup on responsible use of alcohol that was very well received.

Music was provided by the Americana Band made up of top band leaders from the Dubuque area.

Plans are already underway for a second event to be held next year.
Labels: festival, platteville, press release