Posted by Jeff
Email ThisBlogThis!Share to TwitterShare to FacebookShare to Pinterest
Madison Beer Review, Hoosier Beer Geek and StL Hops have teamed up just in time to provide some traveling help for your summer. Looking to drive somewhere other than Chicago? We've put together some travel ideas for the beer geek in a foreign city. Today we'll bring you a weekend in Indianapolis. Tomorrow, a weekend in St. Louis. Friday, we'll take you for a tour around good ol' Madison, WI.

As always, if you have anything to add to these, please comment! 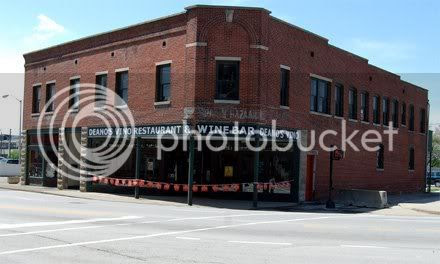 Deano's Vino, Fountain Square, Indianapolis
Dead center of the Fountain Square neighborhood lies Deano's Vino, a bar/restaurant better known to locals as one of the city's more relaxed wine drinking establishments. Don't let that scare you off - Deano's has (just) three taps, all stocking craft beer - usually a Bell's product, something from Crooked Tree, and a wildcard. In addition there's a craft-heavy bottled beer list that's 30+ deep. Sit at the bar (try to get one of the much more comfortable larger stools - shouldn't be a problem this early) and watch and listen as bartender Nick repeatedly lays into the clientele. Do not expect fast service at Deano's - it's not going to happen. Instead, be patient, enjoy your beer, and have a conversation with the folks around you - you'll soon realize that everyone at Deano's is a regular.

You won't have to go far from Deano's (just across the street, actually) to check out Shelbi Street Cafe and Bistro's rooftop garden. Choose from the cafe's extensive seasonable menu, add an outdoor rooftop view of the city, and you're sure to have a winner. Shelbi Street also features a nice little beer menu, and the Bread Pudding desert is a nice way to top off a stomach filled with beer.

Don't leave the building! Hopefully you've made reservations early, because Duck Pin Bowling is a popular weekend activity in Fountain Square. Duck Pin bowling is a ten-pin game, but you use a softball-sized ball. It's a very 50's sort of thing, and the 11 p.m closing time means you'll be back to the hotel and get enough sleep in for tomorrow's marathon drinking session.

Be late and expect a wait when trying to eat at the cozy City Cafe. The breakfast menu features interesting spins on classic breakfast recipes, and a regular Saturday morning special option - either a specially (and rarely repeated) pancake option - or a fish option. I tend to trust the chef and go with whatever they're doing with the pancakes, but the fish (for breakfast!) special usually looks like a winner as well. Of course if you'd prefer something else, the battered french toast or the eggs benedict are tasty options.

9 A.m.
A Slight Respite Before The Gauntlet

After filling your belly, head across the street to the north side of Veterans Memorial Park, and the newly redesigned Indianapolis Central Library. Reopened in 2008, the library project was overrun with construction problems and came in way overbudget. But the building is spectacular, and the downtown views from the upper floors are quite an asset.

2 P.m.
Figure out Who's the Designated Driver Beforehand, and Get Your Afternoon Drunk On 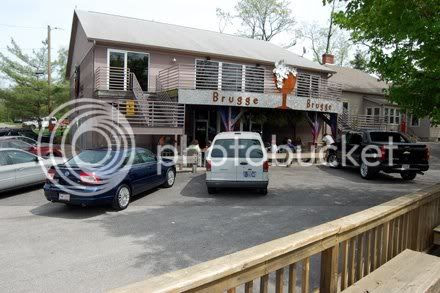 Brugge Brasserie, Broad Ripple, Indianapolis
Head to Indy's Broad Ripple neighborhood and settle into a chair on the porch or deck at Brugge Brasserie, where you can watch the locals passing by on the nearby Monon Trail. While the upstairs bar offers a nice assortment of foreign and domestic beer options, you'll want to start off with the Black - a beer that might be Brugge's calling card. Pair your Black with an appetizer of frites (fries); If you've got company order the L'Enorme - the myriad of sauces make for good conversation. For a main course, try anything off the menu - the crepes, mitrailettes (sandwiches), soups, and mussels are all winners here. Before leaving, be sure to have a Tripel (and remember there's a two Triple limit). Stop there, though - you're just getting started with the drinking.

4 P.m.
Nevermind the Bollocks, It's the Broad Ripple Brewpub 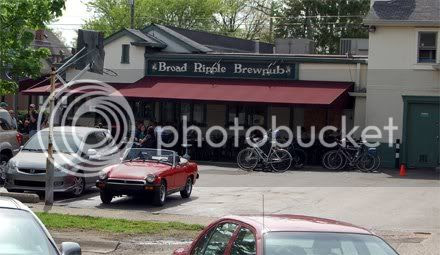 Broad Ripple Brewpub, Broad Ripple, Indianapolis
Instead of getting back in the car, head north (by foot) on the Monon Trail about two blocks to the Broad Ripple Brewpub, Indiana's oldest. Established in 1990, the brewpub specializes in authentic English style beer - usually under-carbonated and supremely sessionable. While any of the beers on the menu are worth a shot, we usually start with whatever they've got on cask. If you're lucky enough to catch the porter on cask, watch out - you may never want to leave.

If you've still got the stomach for it, take a walk to over to Chumley's Beer House before the college kids show up. Featuring 50 taps (roughly 25 craft), you're sure to find something you haven't had before. If I were you, I'd get out of there before the place gets too busy. Then again, I hate people.

Hopefully you've been eating a little along the way, but you'll want to finish up with the city's best pizza. Bazbeaux Broad Ripple (811 E Westfield Blvd, Indianapolis, (317) 255-5711) features a variety of modern pizza options, all of them tasty. The Quattro Formaggio (romano, cheddar, ricotta, mozzarella, provolone, bacon and mushroom) is a Hoosier Beer Geek favorite. And they've got a few beer options, as well.

Find your way back to Brugge (for an on-tap Three Floyds Alpha King) or your hotel as safely as possible.

A visit to Indinapolis wouldn't be complete without a visit to the shops and restaurants of the Mass Avenue district. Stop in at Hoaglin To Go (448 Massachusetes Ave, (317) 423-0300) for a filling breakfast before wandering over to Luna Music to check out the latest and greatest in music. Head towards downtown and stop in at Mass Ave Toys (409 Massachusetts Ave, (317) 955-8697) and pick up something for the young one at home.

And if you still want to drink (...you're a harder man than I), there are plenty of bars around - The Rathskeller, MacNivens, Chatham Tap and Old Point all have craft beer options.
Labels: 36 hours, indy, traveling