We finish the week of cooking out of Lucy Saunders' The Best of American Beer & Food with a traditional Flemish dish called "Waterzooi". The recipe comes from Sean Paxton, the Homebrew Chef. It is a watery chicken stew of sorts that uses seasonal vegetables - in this case, winter seasonal vegetables of carrots, onion, fennel, leeks, celery, and potatoes. It also calls for a Belgian Tripel or strong golden ale. I have in my notes that I wanted to use Furthermore's Makeweight, but since I had a bottle lying around of Ale Asylum's Mercy, I used that instead.

This is another great meal that takes a little bit of preparation, a lot of waiting, and nets a whole ton of food for a pretty decent price - especially if you use vegetables that you happen to have lying around. You could easily substitute other vegetables like parsnips, turnips, kohlrabi, cabbage, squash, eggplant - whatever you happen to have on hand. And while it calls specifically for a Belgian beer, preferably a tripel, you could easily use anything that would cook well, like a pilsner, bock, pale ale, or probably go darker to impart a little bit of color in the sauce with a brown or porter or even a stout might be interesting. In other words, it's an extremely versatile recipe that is great for leftovers. 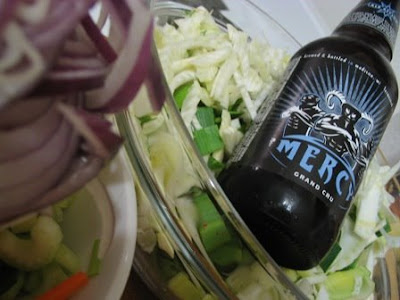 Put butter and olive oil in a large Dutch oven or stockpot and place over medium heat until the butter bubbles. Add chicken and stir. Let chicken brown 3 minutes, then reduce heat to low. Add shallots and cook 3 minutes.

Add leeks and fennel, and cook 3 minutes or until leeks are soft. Add carrots, celery, potatoes, stock, cream, beer, bay leaves, and thyme, bringing mixture to a simmer. Cover and cook 25 to 30 minutes, or until chicken is cooked through and vegetables are tender. Do not bring to a boil, just a light simmer, or cream will curdle. Remove bay leaves before serving. 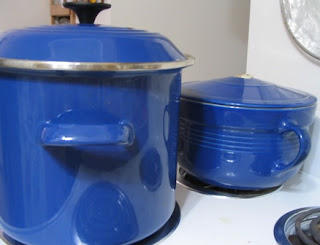 OK, some notes:
- use the biggest f-ing stock pot you got. I used a good sized "dutch oven" sized stock pot and I got the leeks and fennel in, but it was overflowing before I could get the potatoes in and had to transfer it to a larger, proper, stockpot.
- The prep on this took a little longer than I expected and start (open refrigerator to pull out veggies) to finish (put in a bowl and start eating) took about 90 minutes; I was taking pictures while I did it, but still ... and I have this device that looks like vegetable peeler, but actually has little ridges in the peeler part that juliennes things, pretty handy - otherwise you can probably skip the julienne and just chop the carrots and fennel
- keeping this thing from boiling is a trick and a half. I wasn't able to manage it and the cream curdled/separated. It didn't taste bad, it just doesn't look great.
- I used a red onion instead of shallots. Turns out I had shallots, I just didn't realize it - still, I like red onion and it turned out fine - this recipe is extremely flexible
- Mrs. MBR didn't think the beer stood out enough, but I was able to note a faint hint of the yeast and malt and it definitely added body to the stock. But this and the Chicken and Artichokes were definitely light on the beer flavor and I don't know if that's because both of these had a lot of competing flavors or if the beers themselves just weren't distinct enough or if the cooking process muted the flavors. This might be interesting if instead of chicken stock, you just used water.
- Another winner. It was pretty easy to make - the prep took some work and the boil issues were kind of tricky, but otherwise, super simple. And we have a lot of leftovers. Kids'll love this one too.
Labels: belgian, cooking, lucy saunders, mercy, waterzooi