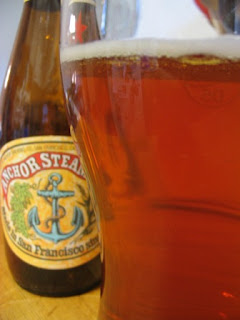 This recipe comes from Diane Alexander, chef at The Brickskeller, a restaurant in Washington DC renowned for its beer selection. In keeping with picking some of the easier recipes from the book The Best of American Beer and Food: Pairing & Cooking With Craft Beer, this recipe is fairly simple. It involves some sauteing and deglazing and then baking for an hour. Easy enough.

The really nice thing about this recipe is that it was relatively inexpensive. I bought a whole 4 pound chicken at Carniceria Guanajuato (on Midvale at the Beltline) for $1.50 per pound(!!), 2 cans of artichokes, the remaining half of box of mushrooms from what we used for the stroganoff, less than $2 worth of dried figs, and a six-pack of Anchor Steam. Total cost of this meal was around $20 and it made 2 dinners and 4 lunches for two people (6 meals!). As leftovers it's versatile enough to shred up and make wraps and sandwiches, or finely chop and make ravioli filling, or to mix and match with other foods. Admittedly, the recipe calls for fresh figs; I don't know where you get fresh figs in Madison in March (yes, I know, only make food with ingredients that are in-season - blah, blah) so I used dried figs from Whole Foods.

Following is the recipe, I'll make some comments about it at the end: 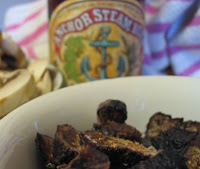 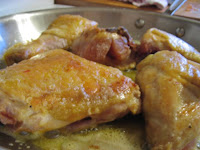 Preheat oven to 325F. Dredge chicken pieces thoroughly in mixture of flour, salt, pepper, and paprika. Heat butter and oil in large deep skillet over medium heat. Brown each piece of chicken on all sides, without crowding the skillet.

Deglaze the skillet with steam lager and a whisk to emulsify pan drippings. Mix in fresh figs and simmer over medium heat 1 minute, scraping skillet well to mix in all of pan brownings. Pour warm fig-beer over chicken. Cover casserole with foil and bake 50 to 60 minutes or until tender. 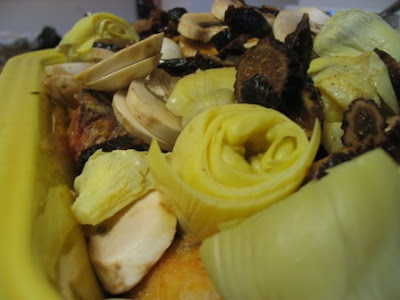 As far as ingredients, as mentioned, the only difficulty was the figs - and I just bought dried figs at Whole Foods. They seemed to work well, though I suspect that some of the fig juice that we would have had with fresh figs would have added to the sauce. I forgot to serve our dishes with the lemon wedges and parsley even though I had them in the refrigerator. Technically this was not a difficult meal to make at all. I suspect beginners may have some difficulty with the browning, but if you over or under-brown it isn't a huge problem because there's plenty of time for the chicken to cook in the oven.

I really liked this meal. It was easy, it was cheap. It was good. The figs were a unique earthy-raisin-like flavor that I'll be using in more meals. The chicken was moist and flavorful. The artichoke hearts and mushrooms were tender. There are plenty of flavors to go around. My only complaint with this recipe is the use of Anchor Steam, actually. There are quite a few flavors going on here and the Anchor Steam isn't flavorful enough to stand out. It adds some nice sweetness, and brightness is there; but, I can't help thinking that a more ale-like beer would work better - a Belgian Tripel or even a Flemish Sour or Brown or even a simple IPA.
Labels: anchor steam, chicken and artichokes, cooking, lucy saunders