Posted by Jeff
Email ThisBlogThis!Share to TwitterShare to FacebookShare to Pinterest
To end your end-of-prohibition day news, two miscellaneous items that I found while researching the article published earlier this morning. 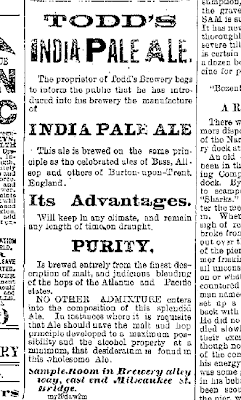 The second item is a letter, poem actually, to the editor by one "M.W.". This letter was published in the Wisconsin State Journal, Friday, July 8, 1932 - remember the repeal of prohibition is beginning to look certain at this point.


One day I passed a brewery so old
that stood there so brazen and cold.
As I gazed at it my mind went back to the years that were past
when that old brewery was running full blast.
Oh brewery, I said, you have caused many a heartbreak and many a tear
on account of the manufacture of your whiskey, wine and beer.
You have caused children to go hungry and to go without shoes
with the selling of your booze.
Up spoke the old brewery with a sneer,
you better get busy, for when we get back our whiskey, wines and our beer,
we will soon have saloons on the corners as of old
and we will cause misery and suffering untold.
We will make it unsafe for the traffic of the street
and endanger the lives of those that we meet
by causing the driver to run wild.
But what care we for the lives of man, woman, or child?
Then he said again with a sneer,
if we can only get back our whiskey, wines and beer
as of the past.
I will soon have this old brewery running full blast.
But what care I for the misery and the sin,
if I can fill my coffers to the brim?
-M.W.