Posted by Jeff
Email ThisBlogThis!Share to TwitterShare to FacebookShare to Pinterest
First things first. The Spooky Beer and Cheese Tasting at Fromagination here in Madison that was scheduled for today, and that we did a write up on last week - it's been canceled. Not sure why. Just got the email last night saying that it had been canceled. So, if you were planning on going, you'll have to wait until November 19th and go to the Holiday Ales & Cheeses class.

For whatever reason I found myself in Milwaukee yesterday. And having to drop a keg off in Chilton. So, I set out on a beautiful afternoon and headed up US-45. Before I left I had checked out The Beer Mapping Project and found out that there was a brewpub in West Bend, WI. I didn't even know West Bend existed, let alone had a brewpub.

Well, it's not often that I get over to that area of the state, so I stopped in while I was, more or less, driving right past. 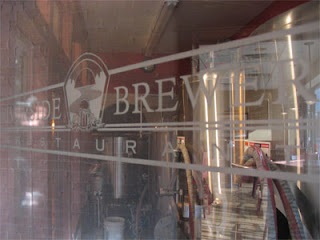 The brewpub is in a small, relatively nondescript supper-club looking facility on Main Street right as you driving into downtown West Bend from the South. Riverside Restaurant and Brewery opened 3 years and 1 week ago according to Jess, the friendly barkeep who has worked at Riverside for ... yup, 3 years and 1 week.

The brewing facility is front-and-center when you walk in the door. The bar is to the left and they have 8 of their own beers plus 2 sodas on tap. The regular beers, created by the first brewer Al Bundy (yes, that is his name), are the amber, the honey ale, and the weiss. In addition to the weiss, they have a fruit weiss - the fruit flavor changes periodically - depending on the flavor they use extracts, concentrates and occassionally real fruit to brew it. The Peach Weisse was tart and full of peach aroma with a not-overpowering taste that made it pleasant, if peaches are your thing. Rumor has it that blueberry is next.

Brewer Al Bundy left about a year ago to start his own brewpub and the brewer at Riverside is now a relative brewing newcomer, Chris George. He has added a number of new taps: a stout, an oktoberfest, a "summer quencher", and an Imperial IPA. I had a pint of the IIPA, a nice medium-bodied, hoppy version that had a piney and floral aroma and oily silkiness that was a welcome diversion from the typical cascade hop-bombs that IIPAs have become.

While sipping the beer and polishing off a spinach artichoke dip appetizer, I had a chance to sit down and chat for a minute or two with owner Wayne Kainz. He opened Riverside Brewery and Restaurant 3 years and 1 week ago, but his initial plan had not been to have a brewery. In fact, only when the local Chamber of Commerce found out he was planning the restaurant did they suggest he consider adding a brewing component. While they didn't offer some financing for the additional (fixed) costs of opening a brewery, Mr. Kainz took to the idea and put it into action. It seems to have worked to good success.

I was also given a brief tour of the place. The riverside view looks over the Milwaukee River as it winds it way through West Bend on its way to Lake Michigan. The downstairs, once apartments, and now a built-out dining room and banquet facility. The porch is large enough for a handful of tables, but was a little chilly on a late-October afternoon.

If you live in Milwaukee, West Bend is only about 30 minutes North of you. Otherwise, if you, like me, find yourself driving from Milwaukee to Chilton, or more likely, Milwaukee to Fond du Lac, make sure you stop in for a beer or two and some food.

Over the next few months or so, I want to try to concentrate a little more on the non-Madison markets. We give a lot of attention to Madison-area breweries: Grumpy Troll, Ale Asylum, Great Dane, Tyranena, Furthermore, Capital, New Glarus, etc. And our website is called Madison Beer Review, but think of it like the New York Times or Washington Post - it's more of a home base than a specific market indicator. So, now that gas prices are (comparatively) reasonable, we are going to try to hit the road a little bit - get over to Milwaukee, up to La Crosse, up to Green Bay, and Stevens Point, and the Northwoods, and all of the places in this state that brew great beer.

If you are in one of these places and a regular reader (or even a non-regular reader for that matter) leave us comments and let us what not to miss. Shoot us an email and we'll try to meet up with people when we know we're going to be around.
Labels: fromagination, milwaukee, riverside brewery