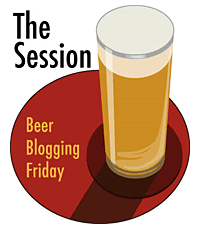 It must be something about the weather that's gotten under us Midwesterners skins. I see this is the first time that the folks over at Hoosier Beer Geek have chosen to participate in The Session, too.

What is The Session? The session is when on the first Friday of every month beer bloggers, and beer fans alike, around the world write about the same topic. This is the the brain child of Stan Hieronymus, who is the author of Brew Like a Monk, and author of the beer blog: Appellation Beer. (Apologies to HBG for basically lifting those few sentences, but it's a good little intro piece).

This month the topic is "Happy Anniversary" and it is hosted by The Barley Blog. So, I'm supposed to write about:

Use this as an excuse to celebrate. Open a limited release anniversary beer from your favorite brewer. Enjoy that special beer you normally only open on your wedding anniversary or birthday. Either way, tell us about it. Why is it a beer you may only drink once a year? Why is that brewery’s annual release the one you selected?

But, I'm not exactly going to write about that.

Instead, I want to talk about an idea that I think is really cool that maybe some brewers looking to scrounge a little change from under the couch cusions might want to consider: custom brewing or white-labeling beer.

As I think I've mentioned before on this site, I'm going to be married soon. So, in figuring out what I want to do for beer for the wedding I started looking around at the Wisconsin brewers to see what would be good. Now, one of the best things about holding a wedding on a farm in the middle of nowhere is that we are not beholden to either distributors or some venue ripping us off for a keg of beer (e.g., The Memorial Union's awesome deal of $225 for a half-barrel - full keg - of f-ing Pabst Blue Ribbon. What?! Yeah. A keg of Pabst f-ing Blue Ribbon for $225!!! That same keg is $69.95 at Riley's - and don't even get me started on the $18.95 bottle of Yellow Tail Shiraz). And alcohol is pretty important to us: not only do I write a blog about beer for goodness sakes, but I have clients who are breweries, my family likes to have a drink or six, and my fiancee's family doesn't mind a couple every now and then either. So, paying $225 for one keg of PBR (let alone the 2.5 kegs that we think we are actually going to need) is not going to cut it.

So, instead my fiancee and I sat down and made a wish list. At the top of the list for me is the Oktoberfest made by Rowland's Calumet Brewery up in Chilton. At the top of my fiance's list: Fallen Apple by Furthermore. Not only was the Oktoberfest style invented for a wedding, but Rowland's is one of the best I've ever had and pretty close to my favorite beer on the planet (much like bands and music, it's hard to have a favorite, but the top 5 are all pretty much the same). Then, it turns out Fallen Apple was originally created by Furthermore's head brewer Aran Madden to use as the champagne toast at his own wedding.

So, you see, creating beers for wedding celebrations has a long history. And we still needed another half-keg of beer. So, I called up a local brewer and asked a favor: How would you like to brew a beer for my wedding? To my delight he agreed and he gave me some ideas for styles based on some different sorts of beers that he's brewed in the past. I picked one (a maple syrup bier de garde) and we've tweaked it a little for our purposes. In this case, I'll get to be around when he's brewing it. It'll be brewed on his test-batch system and go into 5-gallon corny kegs.

But there's no reason other, local, brewers can't offer this as a regular feature. First, it's a service that simply cannot be replicated by the bigger breweries - it is a service that would not scale much beyond local microbreweries and brewpubs. But, it offers an extremely customized, personal interaction with your customers - and it is a great opportunity to create lifetime customers. The service, of course, would bring a premium price. The breweries could offer custom bottling, if feasible. We'll leave aside the (rather glaring) legal issues for now. I can hear the complaints: I don't want to tie up a whole fermenter and aging barrels with one special beer. But, to this I have a couple of ideas: 1) most of these smaller breweries have small test-batch systems that are in the 5-10 gallon range (perfect for a few 5-gallon corny kegs); 2) you could limit choice to a couple of different types of beer that are only available as these special releases and white-label them ("white labeling" is the practice of putting someone else's label on your own product - it is quite common in the clothing industry, for example); 3) if someone wants to pay for a full production of it, what do you care; 4) put a few orders together that are similar enough to be brewed together (or only offer style choices that are based on beers that you are already regularly brewing) but only require minor post-fermentation differences.

Would it be "worth" it? I don't know. These brewers are all very busy. But for the right price could they find some time for the occassional fun, one-off brewing? The bigger question is: what's the right price?