Consider It A Lesson Learned 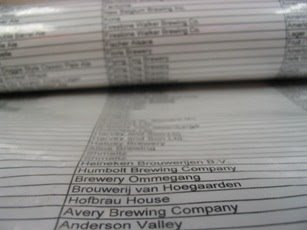 As I may have mentioned, I was in Las Vegas this past weekend. 113 degree weather aside, I've learned a very important lesson to pass on. First, The Freakin' Frog is freakin' great. Over 800 beers in bottles and on-tap. Since I was the first of my group to arrive, I headed over to the Freakin' Frog to grab a beer while I waited for everyone else to show up. On-tap, just to name a few, were Delirium Tremens, the original Coors Banquet, and Lienie's Sunset Wheat. OK, not amazing, but they also had on-tap, Stone's 12th Anniversary, Black Butte XX Porter, and the Speakeasy Double Daddy Imperial IPA. It's this last one that I want to talk to you about today.

I'll stop here to posit a hypothetical situation. It is Noon. You go to a world-renowned beer bar and you have about two hours to kill. You haven't eaten yet, and they serve food at this bar. You know you will have one beer before you eat, and probably one more afterwards. But, when you order your first beer, the bartended asks a strange question: "would you like a pint or a pitcher." After looking around to reassure yourself that he is talking to you only because there is no one else in the bar, you dare to ask "Why would I want a pitcher?" The bartender tells you that a pint of the beer that you want is $6. A pitcher, because it is their lunch special, is only $8. I'll amend this hypothetical further. The bar has just gotten in a case of Stone's Vertical Epic and at 3pm (an hour after you had planned on being there) their afternoon special is 2-for-1 bottles.

What do you do?

Well, if you're anything like me, this situation quickly spirals out of control. You buy the pitcher thinking "Oh, I'll just drink two pints out of this while I eat, then when my friend's plane lands at 2pm I'll just call him and have him help me finish it." In the meantime you taste three other tap beers, chat up the bartender from Queens, the customers from Brooklyn and San Diego, and forget to order food. You probably finish the entire pitcher before your friend even shows up. When he gets there, because it is his bachelor party, you buy him a beer. And yourself. And the guy that you've been chatting with who is a homebrewer from San Diego. Then you also buy 1 bottle of the Vertical Epic to drink now, one to give to your friend, and one to store in your cellar. Oh. did I mention that the pitcher that you bought is 9.5% ABV and the Vertical Epic is close to the same?

Moral of the story: if there is only one of you, you do not need the pitcher. Ever. 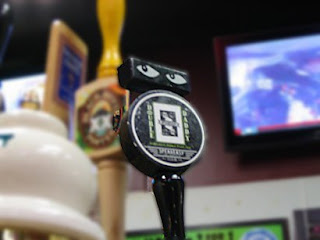 Speakeasy Double Daddy Imperial IPA
Appearance: orange and translucent with some slight haze, viscous but not syrupy, a small white-ish head
Aroma: typical west-coast IPA with a nice caramel malty sweetness
Flavor: supremely balanced with a strong maltiness offset by a big hoppiness; while the cascades are evident mostly in the aroma, there is a strong grassy/hoppy bitterness with only a touch of the grapefruity cascades; I wish I could tell you about the finish, but I'm not sure I ever tasted it
Body: medium bodied and viscous
Drinkability: I finished an entire pitcher by myself in under 2 hours, what do you think?
Summary: I really enjoyed this beer; IIPAs can be really fun beers to drink because the flavors are strong but refreshing, and the beer is strong but drinkable. But they are dangerous beers; while it is possible to drink an entire pitcher of an IIPA in one sitting, it is most certainly not advisable. The Double Daddy is also one of the great things I love about beer and traveling. Speakeasy will probably never be available here in Wisconsin; and Tyranena or Furthermore or O'So will probably never be available in San Francisco; but if you find yourself a stranger in a strange land, there can always be good beers to make you feel like a local - even in a place where there are no locals.
Labels: double daddy, imperial ipa, las vegas, speakeasy