Fridays During The Tour

Posted by Jeff
Email ThisBlogThis!Share to TwitterShare to FacebookShare to Pinterest
Hopefully you find this cool rather than irritating.

Starting July 5th until July 27th, the Tour de France is going on. A grueling three week race where the drama is often more exciting than the race itself. Heck, just in the weeks running up to the Tour one of the top racers in the world, Tom Boonen, was banned from participating because he tested positive for cocaine and Floyd Landis' 2006 victory was officially stripped for use of performance enhancing drugs. You can witness the excitement on Versus where, amazingly, the announcers make 4 hours of riding a bike seem really, really interesting.

So, how is this relevant? Well, France's wine industry gets all the glory, but the brewing industry is less well-recognized. For the next three weeks then, to bring some attention to all of the interesting beers in France, we will be highlighting breweries along the race route. Each Friday we will lay out the stages for the coming week and point out the breweries along the way. We will also try to point out some of the more interesting styles and bring some of the bigger names in French brewing to you.

Here are some Google Earth files that you may find useful for following along: BeerMe, Tour de France. 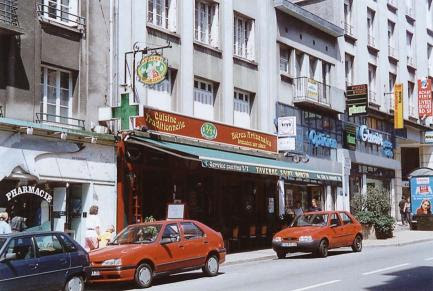 Stage 1: Brest to Plumelec - only one brewery along the way for this first stage. Le Taverne Saint Martin has an abbey bier as their house specialty, along with an amber, a blonde, and a blanche (basically, an unspiced wit). These choices highlight a typical brasserie beer focus in France - drinkability. Other than the abbey, these are probably high carbonated and tend towards the sweet; as the breweries get closer to Belgium, some of the farmhouse funk (bier de garde, which we'll talk about later) and sourness becomes more typical.

Stage 2: Auray to Saint-Brieuc - no major breweries in either the start or the finish, though they do pass by the Brasserie Celtik in Cleguerec, a few miles outside of Neulliac, about half-way through the stage. Brasserie Celtik, a bottling brewery, also has a blonde, a blanche, and an ambree.

Stage 3: St Malo to Nantes - While the early part of the stage is bereft of beer, Nantes and the surrounding area has four. The tour will pass right by Brasserie Nantaise, a quality bottling brewery with an ambree and a blonde. Les Trois Brasseurs is a bottling brewpub in nearby St Sebastien sur Loire. As I'm sure you've been able to guess, they have an ambree, a blonde, and a blanche; they also have a scotch ale. Les Trois Brasseurs has not fared well on RateBeer, but at least it's beer!

Stage 4: Cholet Time Trial - Nothing in Cholet, though Brasserie Melusine is about nine miles south in Chambretaud.

Stage 5: Cholet to Chateauroux - Like we said, France is known more for its wine than for its beer for a reason. Again, no breweries along the way, though Brasserie de la Lande is about 10 miles south of Chateauroux in Jeu les Bois between the finish of stage 5 and the start of stage 6.

Stage 6: Aigurande to Super-Besse Sancy - Again, nothing directly on the route, though Ferme Brasserie des Collines is about 7 miles East of Ladapeyre (mid-point of the first two sprint points).

Stage 7: Briode to Aurillac - A short hilly stage that has no breweries along the way. Enjoy the scenery; hope you grabbed some beer to tie you over until Saturday (stage 8) where there are 4 breweries along the route through the flatlands of South-Western France leading into the Pyrnees.

Hope you've enjoyed this little feature. We'll see you next Friday when we look at the breweries in the Basque region and along the France-Spain border in the Pyrnees
Labels: france, tour de france