A Week of Grilling and Beer - Day 4 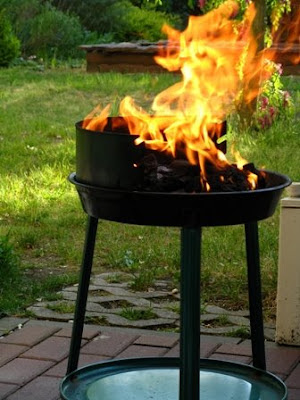 Yesterday we talked with a couple of brewpub brewers.

Today, we have just one guest, Lucy Saunders. She has, quite literally, written the book on grilling with beer. The book is called, unsurprisingly, "Grilling With Beer" and you can order it from her website. Her books not only suggested beers to be paired with your grilled food, but also recipes for including beer in your food.

Ms. Saunders suggests that one of the best reasons to use beer in your BBQ sauce is because "beer is much less acidic than wine, vinegar or citrus juices commonly used in BBQ sauces and marinades. It will tenderize meats without breaking down texture as rapidly as more powerful acids." Moreover, "from apricot ale to witbier, there's a flavor that matches a meat, chicken or seafood sauce destined for the grill."

Here's what Lucy recommends for that Memorial Day BBQ:


My favorite style for grilled foods in spring is an unfiltered black wheat ale or dunkelweizen - it's a bit crisp on the palate, with some tart yeast notes and enough dark malt to meld with the seared and smoky flavors of most of my favorite grilled foods.

You can find recipes for everything from grilled vegetables to beer-based marinades from her new cookbook, The Best of American Beer & Food

The dunkelweizen is an interesting style. While it is a dark beer, it is not a heavy beer. In fact, dunkels can often be very light. But, it is not a particularly popular style. I'm not aware of any major Wisconsin brewery that makes one - though there is a rumor floatin' about that Tyranena might try an Imperial Black Weizen beer. And Das Bierhaus, an authentic German brewpub in Menomonie, makes one.
Labels: cooking, grilling