A Week of Grilling And Beer - Day 3 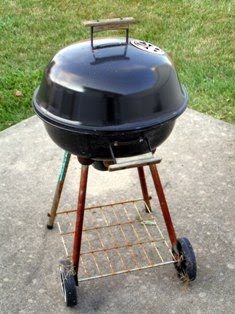 So, here we are on Day 3. Yesterday, we talked to two retailers and they made some awesome suggestions. Before we get to today's guests, I want to add one more retailer response, Adam from Star Liquor.


When it comes to summer beers the options are many. I can think of no better way to spend a warm summer evening than with a cold brew and a flaming hot grill. In summer I often defer to beers that are lighter in color to help combat the heat and humidity that are so common here in Wisconsin for three months out of the year. Light in color thankfully doesn't have to mean light on flavor and while I see no sin in picking up an inexpensive 30 pack of some macro brew if I have to sate the thirst of a big group I still have high standards for myself. So here's a few personal favorite combos:

With burgers and brats:

Here is where it is important to have and utterly quaffable brew because just like I might have a few of each sandwiches I will also have a few of each brews. A couple of favorites include New Glarus Edel Pils and Capital's Special Pilsner.

With a great marinated or dry rubbed pork tenderloin:

In this case I tend to go for something with a bit of sweetness especially if the marinade is spicy. Lake Louie's Belgian Prairie Moon or Furthermore's Fatty Boombalatty fit the bill nicely.

If Steak is on the menu:

Here is where I cry out for more flavor and something with some good hop to it. Ale Asylum's Hopalicious and Central Waters Glacial Trail IPA both go down well with a hearty meal.

I know this list is skewed to the local and I could have chosen any number of brews from around the country or the world but here at Star we try to push the local guy first and we are lucky enough here in Madison to be surrounded by some great ones.

Today's next guests represent not only the best brewpub in the Madison area, but an up-and-coming brewer opening a new brewpub here in Madison.

Up first, brewer Mark "The Captain" Duchow is brewmaster at The Grumpy Troll out in Mount Horeb. Winner of numerous awards, his beers are at once highly skilled and refined, yet also completely approachable. As a brewmaster at a brewpub, he has years of experience crafting beers meant to be consumed not in isolation, but rather alongside the tastes and aromas of lunches and suppers.


My favorite BBQ is Texas slow "Cold Smoked" brisket and hot smoked oysters. But I also dig Carolina style, vinegar based and slow smoked pork, and of course there is nothing like the Midwestern sweet tomato BBQ chicken.

In Texas I drink a Lone Star with my Brisket and smoked oysters because of the fact that the only places you can get the best BBQ, they only sell Lone Star. I truly would love to pair up a true Texas BBQ with my Curly Peated Scotch Ale or the Spetsnaz Stout. But on the other hand on a hot Texas afternoon temps can reach 110 , a Lone Star is all I can handle.

The Carolina BBQ is pulled smoked pork in a semi sweet soupy vinegar sauce served with boiled potatoes and cornbread. I would pair up the Flanders Ned Ale, Ned is a traditional Flanders-style red ale fermented with both bacteria and yeast. It is fruity and tart, a must try.

I can see myself sitting in Fowler Park on a warm summer afternoon in my home town of Oconomowoc cooking over the grill with chicken drumstick smothered in sweet BBQ sauce and a Captain Fred in my hand. The Capt. Fred is an American lager and it goes great with the BBQ chicken tradition.

The Flanders Ned is a great suggestion and there are plenty of other great Flanders' sour beers. The style is typically lighter, yet full flavored and with a great, unique sour, as opposed to hoppy bitter, bite.

Our final guest for today is Joe Walts, ex-assistant brewer at JT Whitneys and now in the process of starting up a brewpub, RePublic, to be plopped smack into the middle of the boho East side. You can check out his blog, and follow his progress at http://republicbrewpub.blogspot.com - it's a great lesson in starting up a new small business, with problems that are not just unique to breweries.


Oh man, I'm a total pretender when it comes to beer and food pairings. I love that specific beers and foods can make each other taste better, but my senses operate on too crude of a level to really appreciate it. One concept which isn't lost on my tongue is that flavor intensities need to match. Since the impacts of most cookout foods tend to be in the same ballpark, it's pretty easy to pick a beer for the day and roll. If I had to choose just one to get me through the summer, it would be Burning River Pale Ale by Great Lakes Brewing Company. Its crisp hoppiness is refreshing on hot days, but the beer has enough flavor to handle the heartiness and caramelization of grilled food. Most importantly, though, is that Burning River has been involved with a lot of good memories. I drink it straight out of the bottle too, because I'm that much of a heathen. As for the food, I loves me a good brat but I don't have a problem acknowledging the superiority of hamburgers (I'm not a native Wisconsinite). This is my favorite way to build a burger:

-Season the beef with Lawry's, which also does good things for Boca burgers.
-Cook the meat medium-rare on a charcoal grill.
-Sautee white onions in butter and Worcestershire sauce until crispy.
-Butter the insides of the buns and brown them like grilled cheese sandwiches.
-Top the burger with swiss cheese, burnt onions and mayo.

If there's no kitchen nearby, raw onions and grill-charred buns are admirable substitutes. Mmm... BBQ.

Joe wins mad props for the Burning River; as a native Clevelander, I've consumed more of this beer than I'm capable of remembering.

But, what I also love about Joe's recommendations is the implicit acknowledgement and recognition that Bruce Springsteen related when asked about the meaning behind his lyrics. When asked whether he sat down to write these epic tales of working class life, The Boss replied that he was just writing what came, it wasn't until afterwards, and often not until someone else pointed it out, that he recognized the universal struggles evident.

Similarly, despite the romantic notions perpetuated by beer snobs, and so-called experts, and the brewing industry itself - perhaps taking a page from the wine industry hype-book - the brewers are just trying to get the best beer out that they know how to make. It's not until some genius sits down with 30 family members at a picnic table and tips back an ice-cold Spetznaz Stout in the seering August heat while devouring cold-smoked brisket and says "You know, I would have never guessed it, but the chocolate and coffee notes and the full body of this stout are perfect with this bbq" that the world knows of this genius pairing.
Labels: cooking, grilling