Mama Said ... Knock You Out

Posted by Jeff
Email ThisBlogThis!Share to TwitterShare to FacebookShare to Pinterest
As LL Cool J once proudly barked "Don't call it a come-back, I've been here for years."

Schlitz is returning to bottles, eliminating the accelerated fermentation, dropping the corn from the grain bill and adding some hops. Don't believe me? Maybe you'll believe the Milwaukee Journal-Sentinel. According to the article, the "new" recipe is actually an "old" recipe used by Schlitz before it made some changes in the late 1960s.

[Accelerated fermentation, adopted by Schlitz in 1967, is a process] where every yeast cell is held in active suspension in the fermenter until it has converted the sugars to the desired amount of alcohol. ABF was devised as a control over beer quality and uniformity. It hastened fermentation by 10 days and allowed a 25% increase in the brewery's production capacity (this process was widely adopted by other brewers). But the word was out among beer drinkers that Schlitz had changed the taste of its beer. The rumor was that the beer was still 'green', not properly aged. While some thought the taste change came from the new process, others thought that it was due to the kind of barley available in the mid-1970's (some believed that Schlitz had switched from barley to corn).

Initially, the altered Schlitz beer was thought to possess several advantages. A lighter beer, one which the public had begun to demand, resulted from the new recipe. An aftertaste was eliminated, encouraging beer drinkers to consume more. Also production costs were trimmed by as much as fifty cents per barrel. Yet, as it appeared to the public, Schlitz was cutting on quality in order to increase profits-and was ruining the taste of the beer in the process. From Michael Reilly's History of Schlitz.

While some question exactly which change caused the downfall of Schlitz, the fact is in the 50s it was America's #1 beer and by the early 80s it was a second-rate has-been not even good enough for consumption by drunk fraternity boys. At some point Schlitz was purchased by Stroh's and then later by Pabst who owns it now. 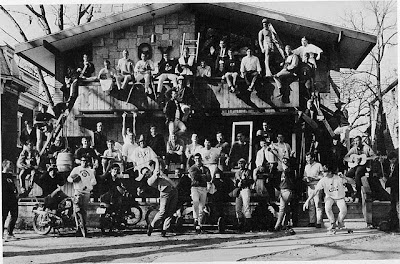 Schlitz is returning to the recipe that was good enough to almost single-handedly decimate the Wisconsin brewing industry. By the early 1900s Wisconsin was home to over 200 individual breweries, by 1972 there were only 7. In the 1950s, while the vast majority of Wisconsin's breweries were closing, Schlitz became the nation's largest brewery and by the 70s it was still riding that wave of popularity.

What place do these "new" beers serve in today's market though? It seems hard to believe that Schlitz or even Fauerbach could be marketed as a "premium" beer. Yet, one would think there would be some premium attached to the "authenticity" angle. The conventional wisdom is that there are two types of beer drinkers out there - those that care what they are drinking (you and I) and those that don't (drunk college kids and the vast majority of the indifferent masses). But, it appears that there may be a third category now, comprised primarily of wistful baby boomers recalling the fraternity days of yore and yearning for that Schlitz and Fauerbach (is Hamm's due for a make-over?!).

So, more generally, the premium derives from the age-old marketing of nostalgia - the idea of linking people and events to products and then later using marketing efforts to recall those events and people and thus invoke desire for the product. We see this here in Wisconsin with Leinenkugel's and their evocation of the Northwoods and its rustic beauty and the fact that Leinie's is so entrenched there that all of our positive associations with the Northwoods invariably revolve around the drinking of a Leinenkugel's. Thus, by merely showing the Northwoods, perhaps via an image of a dock and a sunset along a small wooded lake with a folding chair set on a handmade pier, Miller successfully draws the link between the viewer's recollection of that experience with the beer present during that experience - Leinenkugel's.

Why do I have this gnawing fear that in 30 years Milwaukee's Best Ice is going to be making a comeback? And pictures of young 20-somethings doing kegstands, wearing Umbros or flannel, to a soundtrack of Mudhoney and Soundgarden.
Labels: accelerated fermentation, fauerbach, safari party, schlitz