Posted by Jeff
Email ThisBlogThis!Share to TwitterShare to FacebookShare to Pinterest
On Saturday afternoon, the 4th generation of Fauerbachs, Peter, Neil, David and Fred, hosted a full room at Gray's Tied House in Verona.

The challenge: the homebrewers versus the professional.

At stake for the homebrewers: Fauerbach will brew the winning recipe, will credit the winner on the label of a beer to be marketed as Fauerbach CB, and will provide a scholarship to attend the prestigious Chicago brewing college, the Siebel Institute.

At stake for the master brewer: Pride and the humility to be suffered at the hands of the best of Madison's homebrewers.


View Larger Map
In 1848, a brewery was established by a Bavarian, Mr. Frederick Adam Sprecher, on the corner of Williamson and Blount in Madison. This was the original Sprecher Brewery. In 1859, however, tragedy befell Mr. Sprecher and he died. Later that year, a brewer from the Schlitz brewery in Milwaukee, named Carl Hausmann, and the foreman from the Madison-based Rodermund Brewery, named Mathias Breckheimer, take over the Sprecher brewery from the estate. Five years later, in 1864, Mr. Hausmann left Mr. Breckheimer and formed his own brewery at the corner of State and Gorham called Hausmann's Capital Brewery. Mr. Breckheimer continued to run the brewery at Willy and Blount under the name of Breckheimer Brewing Company. 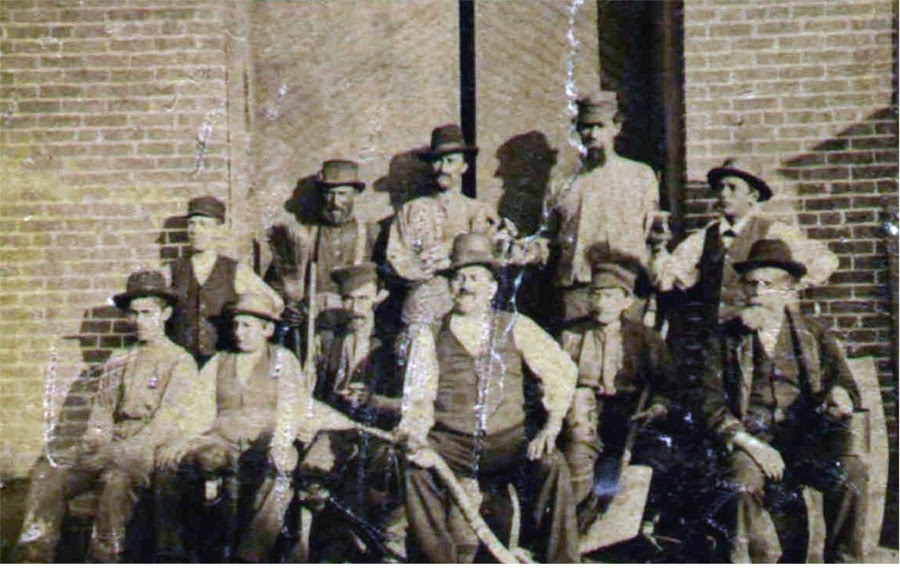 But in 1868, a Bavarian, and brother-in-law of Mr. Sprecher's brother-in-law, named Peter Fauerbach purchased Breckheimer's Brewery and renamed it Fauerbach's Brewery. (side note: the common brother-in-law was a brewer in Portage named Karl Haertel who owned Portage's City Brewery; coincidentally, Mr. Haertel's daughter would later marry Jacob Best, Jr. heir to Milwaukee's Empire Brewery which later became the brewery we all know and love as Pabst. Pay attention, you will be quizzed on this later). Mr. Fauerbach and his family ran the brewery, pausing only for Prohibition from 1919 to 1933, until 1966 when the brewery was closed because of competitive pressures from Pabst, Miller, Budweiser and other large, Nationally distributed beers. It is interesting to note, that by 1860 Wisconsin was the home of almost 200 breweries, but by just over a century later, rather than growing, this number had shrunk to only 7. Today, this number has rebounded a bit, and Wisconsin is home to almost 50 breweries of varying scale.

Proudly, Fauerbach Brewery has resumed operations. Starting in 2005, Peter Fauerbach, a fourth generation Fauerbach, and his cousins Neil, David and Fred, contracted with Fred Grey of Grey's Brewing Company in Janesville to brew an amber lager and an export lager. Then, late last year Peter was giving a presentation to the Madison Homebrewers and Tasters Guild. During the course of the presentation Peter showed a slide containing the recipe of a bock that was brewed starting in 1956 under the CB ("Centennial Brew") brand that Fauerbach had begun in 1948 in celebration of 100 years of brewing at that facility. The recipe, naturally, intrigued the group of homebrewers who immediately asked to be allowed to analyze the recipe, scale it to a 5 gallon batch, and take a shot at brewing it. Out of this was born the new Fauerbach CB ("Challenge Brew"). 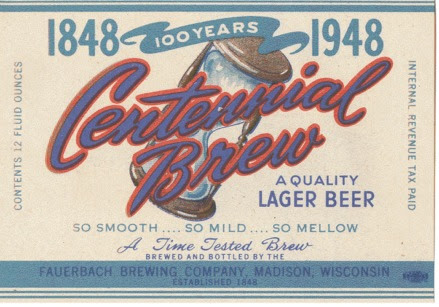 The homebrewers, however, found the recipe to be a challenge in and of itself. To understand why, it is necessary to ask someone who was alive and drinking beer in 1956. If you can find someone from that era with a good enough recollection, they would tell you that the beers were earthy and grainy, with a sweet, light flavor and very low bitterness. In fact, they might tell you that it was something like a Budweiser or a Pabst or a Miller. The true historical reason is somewhat cloudy, but brewers of that time used a significant amount of corn in the brewing process. Of course, modern craft beer snobs will snort and haughtily raise their noses at the very thought of brewing with corn. But, the financial situation of the times, and the quality of grain available virtually required it. Buying high-quality grain was very expensive, what would now be considered brewery-quality barley, what is now called 2-row barley, was grown in limited quantities in the state and shipping it was very expensive. However, cheaper barley and grains were easier to acquire. However, the problem with these grains was that they were very husky and did not take to brewing particularly well. To smooth the flavor and ease the brewing process, brewers used an adjunct ingredient readily available here in the Midwest - corn. Today, corn-adjunct beer is derigeur of the macro beer universe. Budweiser and Miller, and even Sam Adams, all use corn in some proportion in their recipes. However, homebrewers, almost universally, do not.

Thus, the homebrewers had some unique challenges to overcome. The use of high proportions of 6-row barley (a style of barley with many, small grains; as opposed to 2-row barley that has much bigger grains) and corn presented problems with the mash. The "mash" is the first step of the brewing process whereby the grains are, more or less, steeped in hot water. In the second stage brewing, after the grains have been steeped, the liquid extracted and then filtered, hops are generally added. However, this again presented a problem because the hops used by this 1956 recipe are not the types that these homebrewers are accustomed to using.

Nonetheless, with the problems resolved, sixteen beers, including one brewed by Fred Grey, were presented for the competition. The competition was judged by six BJCP-certified judges. The style was set forth as a Dark American Lager (Style 4A). If you have ever been in the south and drank a Shiner Bock, you are familiar with the style. Strangely, this confusion of styles would come into play later. In the first round, the 16 beers were split into two groups of eight and the two teams comprised of 3 judges each picked eight beers to get into the second round. In the second round, all six judges picked the three finalists and named a winner. Not exactly the NCAA tournament or the World Series of Poker, but the competition was fierce enough that the brewers could be seen behind the scenes releasing CO2 valves and fiddling with ice to ensure that the beers was served at just the right temperature with just the right head and carbonation to snatch away victory at the last minute. While the judges notes on the finalists are unknown, my own notes compiled during the public tasting, show the same three beers as three of only four high scores (6s or 7s, on a scale of 1 to 7) I gave for the competition. The winner was rather anti-climatic as Fred Grey, master brewer of Gray's Brewery, won the blind tasting competition. My own notes for his beer reveal the treat we are all in for when it is released to the public later this winter: "a dark ruby filtered color, soft muted earthy malt, I could drink this forever, nice finish." 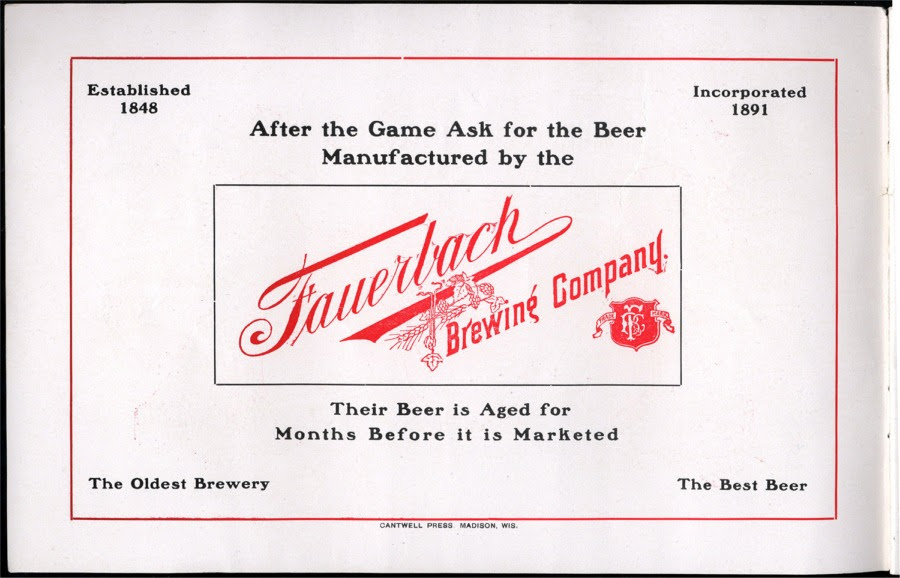 During the public tasting, the invited guests got to enjoy a taste (1 ounce please!) of each of the sixteen beers. The homebrewers' beers covered a surprisingly large group, from hazy and golden to black and smoky. Some tasted like IPAs, some tasted like dopplebocks. All were very drinkable. Homebrewers and Fauerbach family members and media personnel and industry folks all poured for each other and tried to pick their own winner of the "People's Choice Award." There was some confusion among the public about style. Some thought the beer was brewed to a traditional bock style, though the corn would be inappropriate and impossible for this high-alcohol style. Some thought it was brewed to a dopplebock style, though, again, the corn would be inappropriate and the drinkability would not be what the Fauerbachs are looking for. Most did not seem to care however, and were tasting merely to see which they liked the best; which, at the end of the day is what is important. The Fauerbachs are not brewing for BJCP certified judges and some official determination that this beer is the "best version of a style" - they are brewing beers that you and I, and our parents and our brothers and sisters will want to drink at family events. A beer to be enjoyed while watching the Badger's football games. And the public tasting was like sitting down with family to an afternoon brunch - we heard about trips to see the Hamburg Symphony, we heard about interesting writing, we heard about trials and tribulations. And, at the end of the day, after laughing together and getting to know each other in the very setting that the Fauerbach CB is intended, we voted for the "People's Choice" winner. And it was won by a single vote by a homebrewer, for a soft, dark beer with a surprising lemony brightness and subtle fruity bitterness.
Labels: challenge, dark american lager, fauerbach, history