Four Gallons At A Time

Posted by Joe Walts
Email ThisBlogThis!Share to TwitterShare to FacebookShare to Pinterest
Behold! Krausen from 4.2 gallons of 1.121-OG Black Saison in a 10-gallon keg: 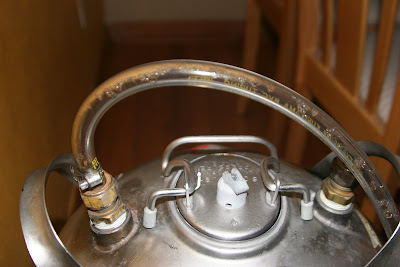 I took the picture 17 hours after I pitched the yeast, but I don't know when the foam became visible. I'm glad I didn't ferment the beer in a carboy. Anyway, I plan to add raspberries during the late stages of fermentation and mature the beer on oak chips. For the five or six of you who followed the RePublic weblog, this beer will be the sequel to my anniversary beer. My previous batch, which improved over the course of five anniversaries, died of oxidation last year while rescuing its family from the remains of a destroyed sinking battleship.

UPDATE: my last anniversary beer isn't dead! Over the last week, my wife and I cracked open three bottles so I could recover the glass. To our surprise, two of the bottles were good and one was heavily oxidized. Explaining the probable reason requires a little back story. Six years ago, the first bottle I opened was completely flat. After turning the rest of the bottles upside down to re-suspend the yeast and hopefully carbonate the beer, I noticed beer leaking through a few of the plastic Champagne corks. It turns out some the corks had holes in them, and the beer in the unaffected bottles was already well-carbonated. My new theory is that the oxidized bottles had corks with holes that were small enough to prevent beer from leaking out, but big enough to let in copious amounts of air and release some of the CO2.