Posted by Joe Walts
Email ThisBlogThis!Share to TwitterShare to FacebookShare to Pinterest
A couple months ago, we had a small discussion on hop bitterness. Garrett noted that perceived bitterness involves more than just IBUs, which is true, but being able to understand and control the individual components of hop character will improve how your recipes meet your expectations. Today, we're going to focus on how alpha acid saturation impacts IBUs.

Either Zymurgy or BYO, I don't remember which magazine, ran an article about Sierra Nevada's Beer Camp which mentioned that the participants compared the lab-measured IBUs of their beers with the three most common calculation methods used by homebrewers: Rager, Garetz and Tinseth. They found the Tinseth method was the most accurate of the three:

Without measuring your IBUs in a lab and fine-tuning your predictions to match your brewing system and packaging methods, the best you can expect from any IBU calculation is a ballpark estimate. Even with the bar set nice and low, only the Rager method acknowledges IBU contributions from whirlpooling the wort after boiling, which is beyond the scope of this post, and only the Garetz method takes alpha acid saturation into account.

I started with the premise that Tinseth's numbers are pretty good, but they need tweaking at the high end. I based my tweaks on two data points:

-In the Beer Camp article, the Tinseth method was pretty close for a 65-IBU beer.
-When Deschutes tried to brew two batches of 243-IBU beer, they ended up with 80- and 87-IBU beers (I don't have a link to share because Deschutes took down the blog post). I don't know how Deschutes predicted their IBU values, but I assumed they were similar to what Tinseth would compute.

I chose to include a correction factor that leaves the Tinseth calculations alone at 65 IBUs and below, but otherwise decreases utilization such that my calculations predict 85 IBUs when Tinseth predicts 240 IBUs. Furthermore, I didn't want to create a situation where increasing a hop addition could result in less bitterness. I use the following multiplier to satisfy those criteria:

When my target bitterness is above 65 IBUs, I multiply the Tinseth utilization values of each hop addition by the multiplier. Here's what it looks like across a range of IBUs: 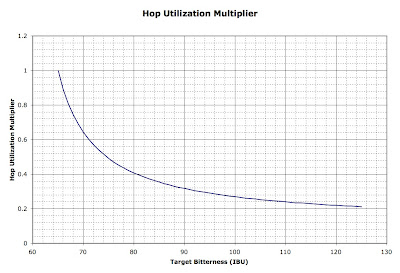 It's common knowledge that claims of 120+ IBUs for bottled beers are ridiculous, but claims of 80+ IBUs may also be absurd unless the brewers of those beers use similar correction factors (I don't know of any who do) or test their IBUs in labs.
Labels: five gallons, hops