Falling Rock Beer Bar. Generally considered one of the best beer bars in the United States. The taplist here is incredible even if the prices are a little steep. But I did manage to score half-pint pours of Green Flash's Le Freak ($6), Russian River's Santification ($6),and The Lost Abbey's Framboise De Amorosa ($7). 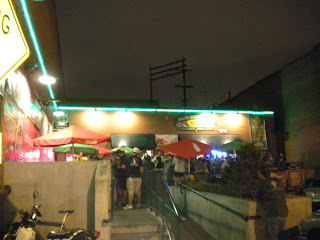 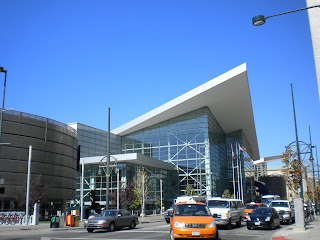 After I picked up the media pass, it was off to Wynkoop Brewing Company. The fresh hop IPA was a nice thirst-quencher while sitting on the patio in sunny, 80 degree weather. 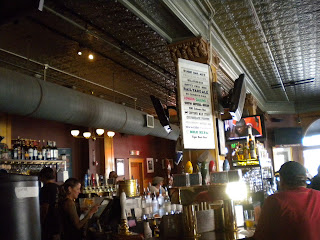 This is the line inside at 4:30pm. The event doesn't even start for another hour yet and this line folds in on itself and winds around the building for what is probably a full city block along the side of the venue. 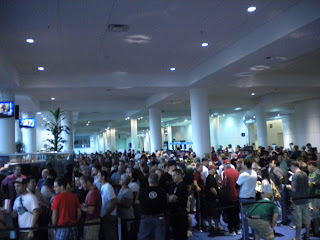 Sorry for the yellow, but the lights inside were, well, yellow gym stadium lights. This is just one quarter of one aisle. There were 6 aisles. 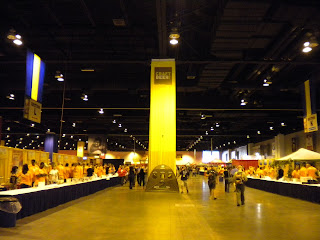 Oskar Blues did not win best end-cap, but the beer was pretty good. Ten Fidy wasn't out yet, so I had to settle for a Gubna. 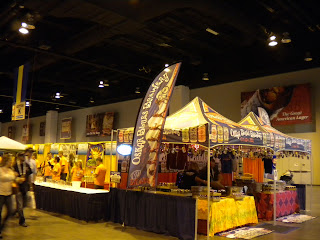 You are looking at about half of the line for Dogfish Head beers. They were running Palo Santo through a Randall of coffee beans; very, very yummy. 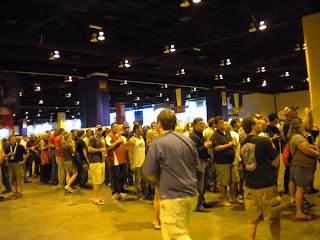 Ah. There we are. Got the light figured out on the camera, just in time to take a picture of Uncle Billy's Brew and Que from Austin, Texas. I really enjoyed the "Hell in Keller" kellerbier. A great example of one of the things that breweries do much, much better than wineries: humor. 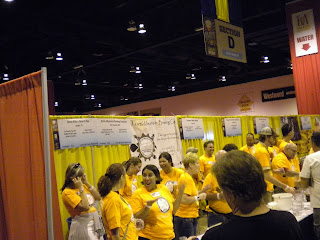 A picture of the only Michael Jackson worth giving a damn about. 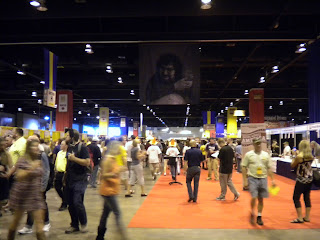 The media lunch had some fancy food. 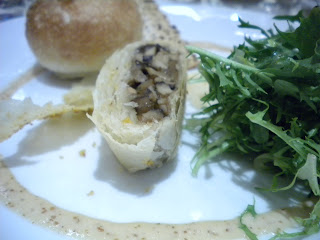 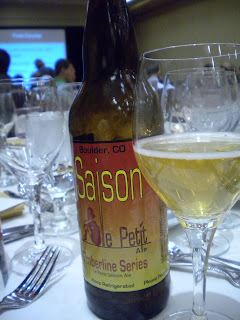 Another of the fine beers at the Media Luncheon. You will notice that this beer, The Alchemist Ouroboros IIPA, states that this bottle is indeed a rare sight; the brewpub in Waterbury, Vermont doesn't even have growlers. Hand bottled and labeled just for the media lunch. Thanks John! 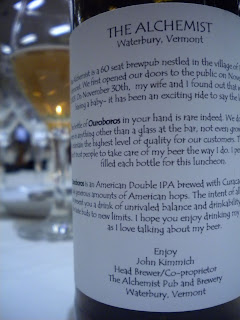 "Surf and turf" (pork and salmon) and beer. As I mentioned in my post on Day 1, this year the media privileges were expanded a bit and the event was a little more lenient about who they let in. The lunch was mainly for folks in the "big boy" media (Food and Wine Magazine and Spike TV). Still, I'd like to give a shout to some of my media homies that were nice enough to say hello: Steve at BeerAndVideogames.com,  Stan at DrinkEatTravel.com, Mike at Philly Philms shooting a documentary about the beer culture of Philadelphia, Lee at Thrillist Denver, and Ginger Johnson at Women Enjoying Beer who happens to know Madison's own House of Brews brewer, Page Buchanan. 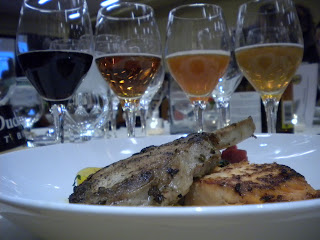 Cigar City Humidor IIPA won one of the three medals for best IIPA the next day. 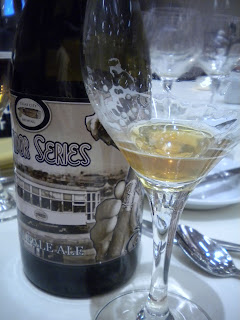 Chocolate, chocolate, and more chocolate with a bit of raspberry. Oh and the Oakshire O'Dark 30 Cascadian Dark Ale (a new, pretentious name for Black IPAs; apparently there's some "debate" over what a "Black IPA" means, so these breweries are now calling their beers "Cascadian Dark Ale"). 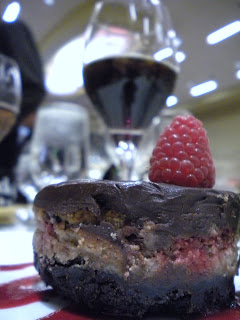 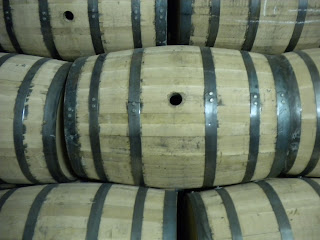 Jess George, proprietor and head distiller at Stranahan's pours some of his amazing whiskey. I love that craft distilling is kind of coming along for the ride with craft beer; these guys are making some wonderful stuff and I seriously need to buy a bottle; though at $55 a bottle, I will drink it slowly. 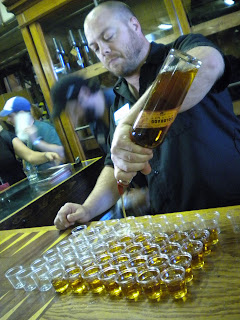 New Glarus Brewing Company represent. The lines for New Glarus rivaled those of Dogfish Head and the Raspberry Tart managed on the 4 awards bestowed on Wisconsin craft breweries (Point won Gold for its wheat, Titletown won a Gold for its Boathouse Pilsner, and Capital won a Bronze for its Weizen Doppelbock). Coming soon a discussion about why Wisconsin could only manage 4 measly awards. Any guesses? I'll give you hint: it's not because we aren't as good at brewing. 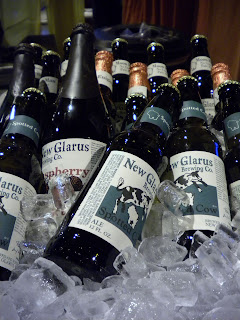 Roasted Barley on display. Looks like coffee, doesn't it. This is what gives your beer that deep roasted, chocolatey flavor and aroma. 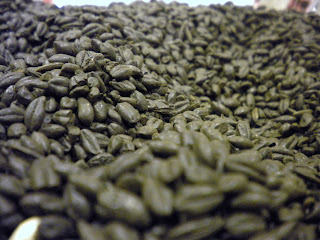 The building, despite its size, could sometimes get ridiculously crowded. Even so, I still managed to find some folks from Wisconsin to chat and share a beer with. 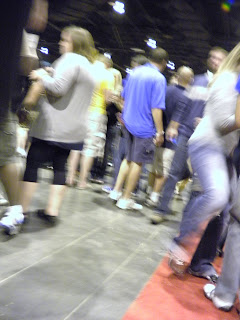 See? Crowded. Very, very crowded. Each session got progressively more crowded and raucous until the place was bursting at the seams on Saturday night. 49,000 people attended the Great American Beer Fest this year. 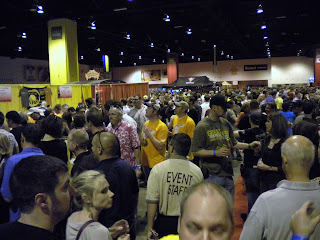 Me and Sam Calgione of Dogfish Head. His sticker says "Sorry I lost my voice Calagione." Thankfully he could still pose for a picture. Sam, of course, is one of the biggest of big personalities in the craft brewing universe; his beer, and willingness to tolerate pictures with even the riff-raff like me, are why his breweries is one of the powerhouses of Amercican Craft Brewing. 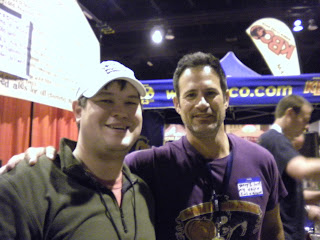 And Charlie Papazian. Without Charlie, none of this - the Brewers Association, the GABF, Madison Beer Review - would be here.  Sure, I'm sure someone would have done it eventually, but Charlie grabbed the craft beer bull by the horns and rode it to almost 10% of the entire beer market. Looking at the numbers, craft beer alone could soon surpass the entire American wine industry in dollar sales. Thank you Charlie. 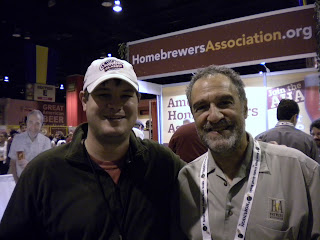