Posted by Matt Lange
Email ThisBlogThis!Share to TwitterShare to FacebookShare to Pinterest 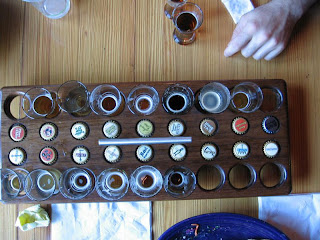 A while back I was drinking a beer and talking with Ale Asylum brewmaster (and, full disclosure, my former employer) Dean Coffey, and I casually mentioned how annoying I find it that West Coast beer geeks seem to think that California is the center of the craft beer universe, often disregarding or diminishing the achievements of other regions. Surely, I argued, the Midwest has just as many great breweries and craft beer consumers as they do out west. Madison in particular seems to be a very beer savvy town, where virtually every bar has at least a Capital and New Glarus tap, with most sprinkling in a few other local crafts for good measure. How arrogant of those west-coasters to suggest that they are so far ahead of us?

“Well,” Dean replied, much to my surprise, “they are a long way ahead of us.” There are simply more bars and restaurants serving more local craft beers, and more people drinking them, he told me. I suddenly realized that my anti-California rant had been totally ridiculous, considering I had never actually been there to experience the craft beer scene for myself. I’d never had beer from breweries like Russian River and Firestone Walker that do not distribute in Wisconsin. Clearly there are great breweries and passionate fans here in Wisconsin, but it is certainly possible that there is a place with even better breweries and even more devoted fans. Maybe California really is the center of the craft beer universe.

A recent trip to San Francisco to visit some friends gave me a chance to experience the beer culture first hand, and even coming in with some high expectations, I was fairly impressed with what I found.

The first beer adventure on the trip was up in Sonoma county wine country. I was traveling with my fiancé, and when she suggested visiting some wineries, I immediately agreed, found a nice little hotel for us to stay in Santa Rosa and even offered to drive our rental car from vineyard to vineyard. Why would a beer geek be so excited to go to wine country? Because right in the middle of all those vineyards, and within walking distance of the aforementioned hotel, is the Russian River Brewing Co. Brewpub, makers of the highly renowned imperial IPA’s Pliny the Elder and Pliny the Younger, as well as a series of wine barrel aged sour beers. I had heard legends of these beers, of bottles and growlers being shipped across the country from beer geek to beer geek, and the chance to try them on tap was something I was not going to pass up.

After a long day of sipping wine and driving along the Pacific coast we finally made it to Russian River, and the first thing I did was order a pint of Pliny the Elder (Pliny the Younger, the bigger of the two beers, is an extremely limited release that usually sells out in less than a day; needless to say, I was unable to try this beer). Even with all the hype surrounding this beer and the traveling it took for me to taste it, I can safely say it still exceeded my expectations. It has huge west coast hop flavor and substantial bitterness without being undrinkable. Many double-IPA’s achieve balance by upping the malt sweetness to even out the hop bitterness, but Pliny somehow retains a relatively light and drinkable body and tons of bitterness without being astringent or unpleasantly bitter. Truly a fantastic beer.

After the Pliny, I had the sampler platter of all 15 beers on tap. The more sessionable beers, despite receiving accolades from some, didn’t do a whole lot for me, although this it is quite possible that after drinking a pint of double IPA, no blonde ale or ordinary bitter are going to stand out very much. I enjoyed both of Russian River’s other two IPA’s, the Blind Pig and Russian River IPA, and was blown away by the wine barrel aged sour beers. I got to try three: the Temptation, aged in Chardonnay barrels; Supplication, aged in Pinot Noir barrels; and the Consecration, aged in cabernet barrels. The Consecration was my favorite, a Belgian strong dark ale base that takes in a bit of tannins and complexity from the wine barrels and a nice amount of sourness and funk from bacteria and Brettanomyces wild yeast, it was great at the brewpub, and the ’09 version I found on tap at Toronado in San Francisco might have been the best beer of the trip (more on that later).

After trying the sampler and a very enjoyable pint of Pliny the Elder, I can see why Russian River has gained such a strong reputation. It’s too bad they don’t distribute outside of the west coast, but I suppose that’s part of the fun of traveling.