Posted by Jeff
Email ThisBlogThis!Share to TwitterShare to FacebookShare to Pinterest
On Wednesday we talked about how New Belgium is using RFID (radio frequency identification) to track kegs through their supply chain. Keg loss, which results in millions of dollars of loss per year, is a signification issue to the brewing industry. In the case of RFID, the brewery is able to track the exact location of the keg and thereby reduce loss; the technology also adds some benefits like enabling tracking metrics and increased keg efficiency which reduces the total number of kegs in circulation. But, RFID technologies are expensive and can be prohibitive if the brewery doesn't have cash on hand to pay for it and all of its attendant costs. 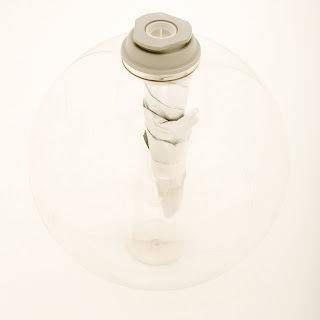 Another option that completely eliminates keg loss is the use of PET recyclable kegs. The keg itself is a pressurized PET plastic ball that can fit inside of a an easy-to-transport lightweight box. The ball has a flexible inner liner which contains the beer. The beer is dispensed by forcing a gas into the ball but outside of the bag, like squeezing toothpaste, so it never comes into contact with the beer. Pretty cool, eh?

These kegs are recyclable just like any PET plastic is. Moreover, the use of these kegs reduces the amount of transportation required in the beer supply chain. In this case, the entire return trip from the retailer to the brewery is eliminated. This not only gets rid of the keg loss, but reduces the beer's carbon footprint. The downside is that the brewery needs a new keg every time it needs a keg. Thus, a brewery that produces on 500 barrels per year would need to purchase 1000 of these kegs every year. Although KeyKeg, one manufacturer of recyclable kegs, claims that its kegs hold 25% more beer than traditional kegs.

So, what's preventing the instant adoption of these recyclable kegs? Well, believe it or not, it has nothing to do with the kegs themselves, but rather how the finances of the brewing industry work.

Brewery A puts its fancy brown ale into two kegs: one a stainless steel, traditional, keg that we'll call KEG S; the second is a recyclable plastic keg we'll call KEG P. The brown ale sells to the distributor for $90 a half-barrel. The plastic keg costs the brewer $30. In the case of KEG S, the keg sells to the Distributor for $90 plus a $30 deposit to ensure the return of the keg. In the case of KEG P, the keg sells for $90 plus $30 for the plastic keg. The distributor estimates that it requires a 25% markup in order to cover its costs and ensure a tidy profit. So, when the kegs are sold to the retailer, the retailer pays $120 ($90 plus 25% markup) plus a $30 deposit for KEG S. The retailer pays $160 ($120 plus a 25% markup) for KEG P. On the retail side of things, the retailer has calculated that its costs plus profits come out to around a 5x multiplier on the cost per pint for a beer. The retailer estimates that it gets 100 pints out of a keg. So, KEG S has a per pint cost of $1.20, while KEG P has a per pint cost of $1.60. Thus, the retailer will sell beer from KEG S at $6 ($1.20 time 5) while it will sell beer from KEG P at $8. Given that this is exactly the same beer, which price do you think the customer would prefer?

Well, them's the breaks you say. You can't expect these companies not to markup their products to make money; that's how business works right?

Sort of. Let's really look at what's going on here for a second. Does it really cost $40 more dollars for the distributor to transport KEG P as opposed to KEG S? Of course not. It costs exactly the same amount. In fact, it probably costs less to transport KEG P because the distributor does not have to pay for someone to pack, un-pack, re-pack, and re-un-pack empty kegs as the keg goes from the retailer back to the brewery. The same is true of the retailer. Does it really cost $2 more PER PINT to pour out of KEG P than KEG S? Of course not.

Let's reverse-engineer this markup for a minute. This 25% is really a shorthand for the amount that the distributor estimates it will cost to transport (distribute) a keg and receive a nice profit. And that amount is somewhere near $30 ($120, the amount it charges the retailer, minus $90, the amount it pays the brewery). Let's further assume $10 of that $30 is profit (about 10% of the cost of the keg) and $20 is actual costs and overhead (gas, wages, etc.). But it doesn't “magically” cost $40 to markup a plastic keg. It still only costs $20 to move the keg. And, in fact, because it only makes the half the trip, it probably only actually costs $15. Plus profit.

The same is true on the retail side. Does it really cost $2 more PER PINT to pour of a plastic keg? Of course not. For the most part (cask and nitrogen might be exceptions), there is some amount that it costs to sell a pint of beer regardless of whether the beer is Miller Lite or South Shore Cream Ale or Palo Santo Marron.

I'm going to make one guess here and the guess is for purposes of illustration, the actual number is somewhat irrelevant. Let's guess that it costs the retailer $2.50 in costs (not including the cost of the beer) and overhead to pour a regular pint of beer. Now, let's re-do the hypothetical.

It's this dogmatic adherence to the markup that is really preventing wide-spread adoption of recyclable kegs. If the industry would look at its true costs and profits instead of blindly marking up, we'd arrive at a much more competitive landscape, have much less transportation of empty kegs, and far happier consumers who buy far more beer. And what's not to like about that?
Labels: keg loss, kegs, pricing