Posted by Jeff
Email ThisBlogThis!Share to TwitterShare to FacebookShare to Pinterest
I happen to have in my possession, a cookbook by one Ms. Lucy Saunders, called The Best of American Beer and Food: Pairing & Cooking With Craft Beer. I like beer. I like food. I like to cook. Seems like a pretty natural fit to cook with beer.

We're all familiar with Beer Can Chicken, but I've always been looking for something a little more. It always seems to me that when beer is mixed in the cooking process that it's used as a novelty for a trick to show your buddies with can of Old Mil when you're all gathered around a grill in late July. In fact, I've seen recipes for beer that specifically call for "flat beer" and "can of cheap beer." But, I'm a firm believer in the cooking rule: if you use crap ingredients you'll get crap results. You don't cook with wine you wouldn't drink; why would you cook with beer that isn't any good (either objectively or subjectively).

So, when this book fell into my lap, it was a godsend. Finally, something that takes beer as an ingredient seriously. I've had a chance to read through the book a couple of times. Not every recipe uses beer, but there is always a specific, generally widely available beer that is suggested. The forward, written by Randy Mosher, interviewed by Beer Talk Today last week, uses the phrase "gastroindustrial monoculture", which is awesome. But his final salvo is right on: "The good beer movement is very hands on, so get busy. You can play a part in getting people to abandon their habitual behavior and shock them - with dazzling beer and food - into thinking about eating and drinking in a whole new way."

The author's introduction is equally inspiring in setting up the entire book: "Because beer is food, it is capable of being enjoyed on several levels simultaneously, including the texture of carbonation, the aromatics as each tiny bubble in the crown of foam bursts, and the flavors perceived on the tongue and palate." The book can be roughly divided into two: educational and cookbook. As an education piece about beer and the pairings and flavors of beer balanced with the flavors, aromas, colors and presentation of the food.

There is an entire section on pairing beer and cheese that tells you more than you could possibly hope to learn in a single reading. Working through some of the recommendations (e.g., baby swiss/cask-conditioned farmhouse ale, dunkelweizen/smoked gouda, etc.) could keep you entertained and entertaining for years. Another section talks about pairing beer and chocolate.

Finally, the bulk of the book discusses food and beer pairings. It puts regional beers in context with regional foods. For example, Bell's Sparkling Ale pairs brilliantly with a dip made of smoked great lakes fish; or, a pan-seared pacific salmon in ponzu sauce with a dark, American brown ale. And, again, there's so much information here that even absent the recipes this book is must have reference for food and beer.

Then, we get to the recipes themselves. As a cookbook, the book has plenty of recipes. But many of them are not for the novice cook. Many of the recipes are complex and technical. But there is still plenty to be learned as each recipe has some introductory text and a recommended beer pairing. Not every recipe uses beer as an ingredient, but each is intended and designed to pair with a beer: for example, the Bittersweet Salad on page 87 that pairs well with a Belgian Tripel.

To keep things simple, I decided that the first thing I would make out of this cookbook was the Wild Game and Mushroom Stroganoff. Stroganoff is a simple, basic dish that keeps well. I happen to have some beef from my wife's farm in the freezer, and since the cow was in the field, that's close enough to "wild" for me. The recipe calls for a smoked porter. I know Rob made one for Benji before he left, but I'm not sure if Tyranena ever plans on releasing that and in any event it wasn't in my refrigerator - so I picked up a 22oz bomber of Stone Smoked Porter. 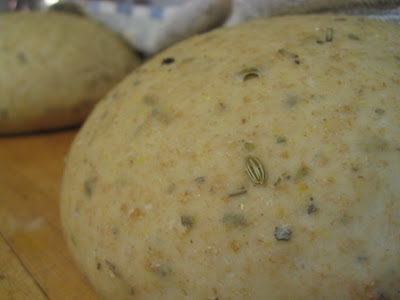 First, I threw together a rustic loaf of Rosemary, Sage and Fennel Seed Bread to go with the meal. I made the bread with a packet of dry yeast, 325 grams of water (about 72 degrees) and around 525 grams of a mix of white, wheat and corn flours. It was set to rise twice and baked at 375 degrees for about 25 minutes.

Yes, I know, egg noodles, bread, very starchy. But I'm not on Adkins. And besides it'll make us full enough that we'll be able to eat this all week. Quickly, here is the recipe (by the way, thank you to Lucy for letting me reproduce these): 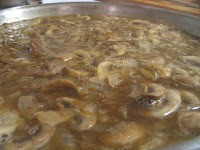 Add butter to juices in skillet and cook over med-high heat until bubly; add onion and shallot and saute until translucent, about 3 minutes. Add mushrooms and saute 2 minutes. Add meat and collect juices on platter back into skillet.

Meanwhile, heat beer in bowl in microwave or in small saucepan on stove until steaming. Add beef broth, stirring until dissolved. Add broth to meat mixture. Bring to a simmer, lower heat and simmer loosely covered or uncovered for 30 minutes. Add warmed sour cream and gently stir until mixed. Simmer, covered, over low heat 8 to 10 minutes. Season with salt and pepper to taste. Serve over cooked pasta. 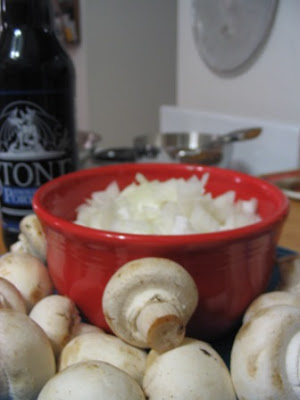 A few notes about this recipe. First, I don't have a microwave, so I had to heat the beer in a saucepan and add the broth to it - I'm not entirely sure why I did this or what heating it accomplished that adding it straight to the meat/onions/mushrooms wouldn't have provided. Second, heating the sour cream didn't seem to add much either as I still had some minor separation in the final product, though not much. I didn't have crimini or morel mushrooms, so white button had to suffice. From start to finish this recipe took a little over an hour and required me to stand at the stove for most of that. This is a bit more time and attention than I typically expect for stroganoff.

But, the better question: was it worth it? Heck yeah. The smoked porter added a subtle but sweet smokiness that rounded out the creaminess well and provided great complexity to the beef flavor. It was a little "thinner", a little more "liquid-y" than I typically make stroganoff, but it's a matter of style and tasted wonderful. It held up really well for leftovers.

On Wednesday we'll tackle the Chicken and Artichoke Hearts in Anchor Steam Beer.

UPDATE: In the course of compiling this cookbook Ms. Saunders aggregated recipes from a number of sources - this one came from Chris Swersey, ex-brewmaster of Leinenkugel's Ballyard Brewery (inside Chase Ballpark), tour guide in Salmon, ID, and competition manager for the Brewer's Association.
Labels: beer and food, book review, cooking, lucy saunders, smoked porter, stone